The Wisdom of Finance 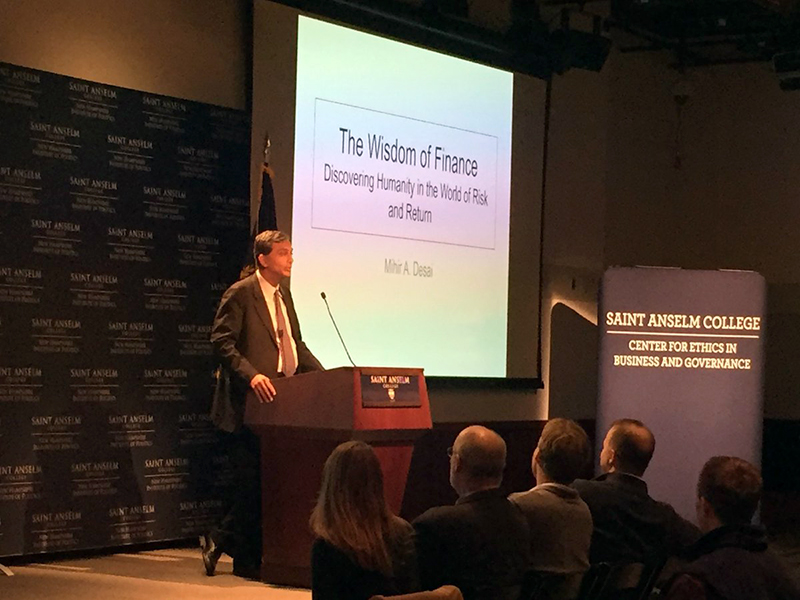 On April 10, Dr. Mihir A. Desai spoke at the New Hampshire Institute of Politics about his latest book release. The event was sponsored by the Saint Anselm College Center for Ethics in Governance Speaker Series. Desai’s book, The Wisdom of Finance: Discovering Humanity in the World of Risk and Return, was released on May 23, 2017 by Houghton Mifflin Harcourt Publishing.

Dr. Desai was born in India but grew up in Hong Kong and New Jersey. He started his education at Brown University, earning a bachelor’s degree in history and economics. From there, he earned his Master’s of Business Administration from Harvard Business School, then his Ph.D. in political economy from Harvard. Since completing his studies, Desai has been working as a professor for the university. He is the Mizuho Financial Group Professor of Finance at Harvard Business School and a Professor of Law at Harvard Law School.

Dr. Desai said that his book started as a lecture he gave at Harvard, and later became a book after a student's suggestion. He said that many people, including his publisher, thought that the title of his book was an oxymoron because most people do not put the words “wisdom” and “finance” together. He said that long ago, the finance and humanities fields were bridged together. They have grown apart over the years, and important lessons have been lost because of that gap.

Instead of presenting financial concepts through a textbook style of writing, Desai introduces concepts through storytelling. For example, Desai presents the concept of risk management through Jane Austen's Pride and Prejudice. In the novel, the protagonist Elizabeth Bennet has to make a decision on who she wants to marry. She is presented with ten different suitors, and still cannot choose one. In frustration, she says that she wishes she could marry all ten of them. This exemplifies risk management because in order to reduce risk of a bad return, one must diversify their portfolio. This means one has to obtain many different kinds of stocks. Elizabeth Bonnet wants to diminish her risk by marrying ten men with different qualities.

Desai’s book includes other concepts such as debt, Capital Asset Pricing Model, and many more in connection to the humanities. His work sheds light on the lost meaning of finance and aims to help financiers remember original ideas and ideals. He believes if the financial industry related more with the humanities, maybe the corrupt practices in finance would not have happened in 2001 and 2008, and maybe it will help prevent them from happening again in the future.