Are We Living in a Post-Truth World? 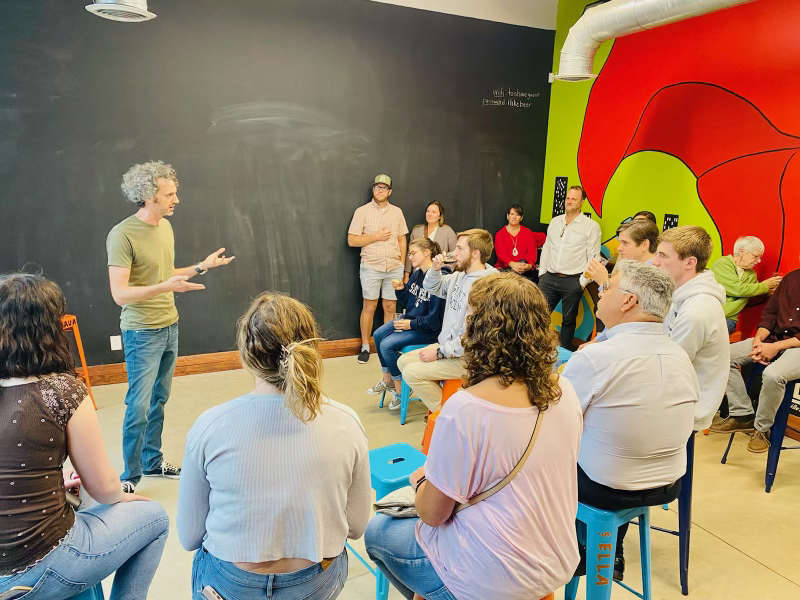 Last week’s Ethics in Our World public discussion was held at To Share Brewing (Manchester, NH) and was led by Professor Josh Tepley of the Philosophy Department. It focused on the value of truth in our society: “Lies, fake news, and conspiracies: are we living in a post-truth world and does it matter?

Tepley began the discussion by laying the groundwork: he argued that we are seeing what appears to be increasingly large segments of society adopt more and more outlandish beliefs about politics, the world, etc. This rejection of conventional truth is seen in measured levels of societal distrust in political leaders, experts, and media members. After offering these initial thoughts, Professor Tepley put forward questions to frame the conversation: how bad is the problem? What are some solutions? Is this phenomenon unique to this time in history?

These questions generated spirited conversation among the general audience. Attendees expressed a wide variety of solutions, from letting those who become misled stay misinformed, to creating a series of educational programs in schools focused on technological literacy and critical thinking. A few themes showed up throughout the event, such as the importance of a reliable media, the role of education in fixing the crisis, and the role we play as individuals in the pursuit of truth.

Participants were highly engaged, and all very interested in discussing the root of the problem and potential solutions. After the event, one community member expressed her continued interest in the topic of truth and her belief that events such as these, with free and civil discourse, are helpful in creating real solutions.

Thanks to To Share Brewing for hosting this conversation, and thank you to the community members who attended and contributed.