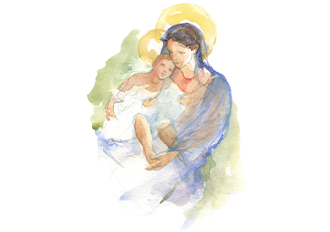 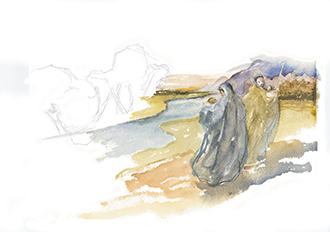 Meditation XIV, or, A Divine and Human Embrace, began by wondering about the Incarnation of the Lord. And in wondering, the mind then turned to meditation on the mystery.  A meditation then turned to a focus on the word “incarnation” itself, and then allowed the ideas or thoughts to flow freely—to inform the imagination, and then the vision.

How is this process different? Perhaps the difference is in this notion of meditation.  Unlike the instance when fixing an image in one’s mind and drawing it out plainly, the process of a meditation drawing blends spontaneity with intentionality. And as the process moves along, the artist can choose to fix a mental image to the page, or pull back the hand a bit to consent to the whispering sound of suggestion.

One unique feature of this watercolor drawing is the blend of forms, whether in mirrored shapes (e.g., the Virgin’s neckline and the Christ Child’s left arm) or in actual overlapping forms (e.g., the Virgin’s cheek pressing on the Christ Child’s head.) Note the soft sound of an amber, aura-cloaked dove in the halo behind the Christ Child’s head, moving like a rising moon into the cloudy blue veil of the Mother Virgin. These blended forms can appear suddenly and significantly, or go completely unnoticed, and sit quietly as abstract shapes suggesting other forms of presence.

The graphic designer, the printer, and I had many conversations in preparing this image for print. I have come to learn how the design and print process actually mimics the creative drawing process.  While there is always mastery and careful technical skill to consider, there is also the “let it be” magic, which allows things to come into being.  Each step has to let the mystery flow.

Hopefully this meditation image rests comfortably with you—this “divine and human embrace”—and that it brings the mystery of the Incarnation of the Lord ever more closely to your hearts.

Light’s Journey: The Holy Family in Flight, is as much a kind of miniature visual allegory as it is a reflection on the whole of the Christmas story.  Created in 2014 at the time of Saint Anselm College’s 125th anniversary, the illustration represents both the trail of history and the pathway forward. The flowing river alongside the Holy Family alludes to the multitudinous references to rivers and waters throughout the scriptures and salvation history, as well as the riverways which move through the region of Manchester where Saint Anselm College was founded.  The nearness of the river draws the Holy Family forward, and also recalls a line from Isaiah 12 (which is also sung at the Easter Vigil) “you will draw water joyfully from the springs of salvation,” signifying the promises held in the birth of a newborn Savior.

While an integral part of the familiar Christmas story, the Flight into Egypt has also evolved into an affectionate monastic theme for me, as the monastic call is traditionally described as a “fuga mundi,” or, a “flight from the world.”  Alumni Hall, the first building of Saint Anselm College, is sketched (in reverse) into the distant hilltop city towards which the Holy Family moves, as they seek to escape the danger Herod presents to the Christ Child (Matthew 2: 13-15).  Saint Anselm College is posed as a “city set apart” (Matthew 5:14) —a safe haven, and a model city where the light from the Holy Family, bearing the Christ Child, can shine from the hilltop.

Hence the title of the drawing: “Light’s Journey.”  This Light (John 1:4, 9) had come into the world, and fully imbues the life of Mary and Joseph in this moment.  While one might have to set the card at a distance to see it, the light leading the parents of the Christ Child comes both from without and within. The brightness at Joseph’s feet (a natural sunlight, from without) extends forward and seems to be leading him, as he leads Mary and the infant in his protective care. The brightness in the sky over the hills ahead, retreats backward, trailing into soft halos over the heads of Joseph, Mary, and the Christ Child.  The trail of light ultimately brightens the cradle of Mary’s tender arm (a holy, spiritual light, from within), and becomes a wholly new source of brightness for all the world to share.

Perhaps the most subtle but significant articulations of the drawing are in the glances of each figure.  Barely perceptible, yet vital to the unity of the group, the eyes of each are carefully attentive.  Joseph’s eyes glance with real concern and love at his wife Mary with the baby. The Virgin Mother looks with amazement at the wonder of her newborn son.  As for the tiny Christ Child, having seen the world for only a few hours, the Chesterton poem “A Little Litany” provides a most fitting line:

Star of his morning; that unfallen star

In that strange starry overturn of space

When earth and sky changed places for an hour

And heaven looked upwards in a human face.