What Remains: Encountering Images of Stolen Art in Geisel Collections 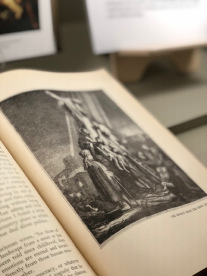 Stories of art heists are the subject of sensational articles, books, and films. They capture the public’s imagination and bring to mind images of masked burglars carefully orchestrating complex and intricate thefts. It is only years after the theft that the true ramifications of these events are felt; stolen pieces of art that remain unfound run the risk of disappearing not only from the walls of museums or private collections but also from the cultural record.

Monographs become one of the few places that retain access to these pieces of art but they are poor substitutes for viewing the real thing.

Using the FBI’s Stolen Art File Database as the source material, this display presents images found in Geisel’s book collection of stolen and still missing artwork. Due to ongoing investigations, not all images are accompanied by details about the theft itself. If that information was made available on the FBI Stolen Art File Database or through newspaper articles, it is presented in the display. The display also contains some examples of recently recovered artwork. Lastly, demonstrating that thefts impact both large and small cultural institutions, details on a theft that occurred at Geisel Library are also presented.

On Thursday January 31st at 3:30 pm, Gwen Verkuilen-Chevalier will discuss the inspiration and selection process for the display and Keith Chevalier will share details of the items that were taken from the Geisel Library. The talk will occur by the foyer display cabinets.

Below is a list of books from the Geisel Library collections that are included in the display: