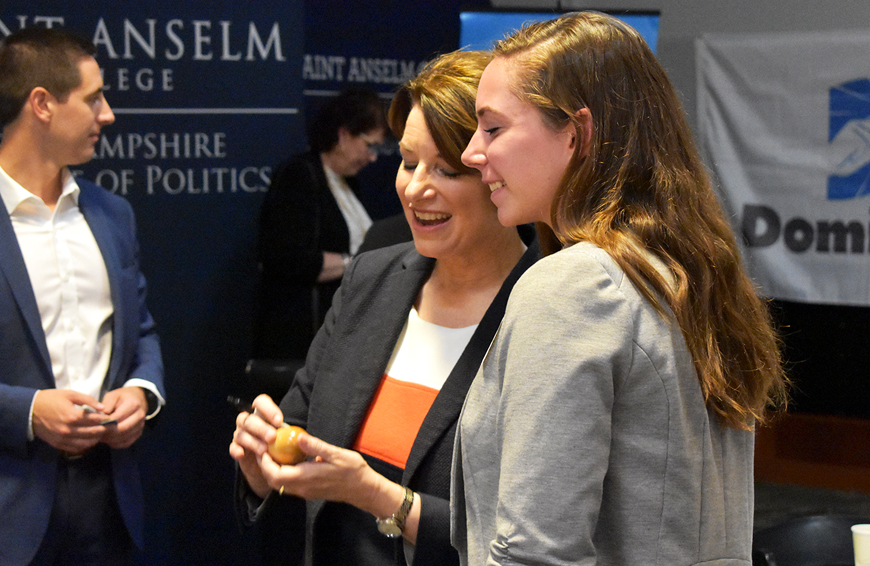 On June 10, U.S. Senator Amy Klobuchar (D-MN) spoke at the New Hampshire Institute of Politics (NHIOP) about her plans for America if she were to be elected president by the nation. From running for high school student council with the slogan, "All the Way with Amy K." to being elected the first female senator of Minnesota, Sen. Klobuchar has done and won it all.

Throughout her Politics & Eggs discussion, she talked about the importance of many different parts of America along with all the factors that could use some change. Starting off with infrastructure and ending with mental health, the Senator made several points about what she believes could use some change in America.

Sen. Klobuchar focused mostly on the importance of the American dream with stories of her family’s past along with ones she has heard along the way. “My grandfather was an immigrant and worked miles underground with iron,” Klobuchar stated. Going on to speak about her father’s work as a journalist and her mother as a teacher who changed the lives of her students, the Senator made an imprint on the audience that anyone can make the most of this country.

On the topic of income inequality, Klobuchar said, “If there is no participation in the economy, then it cannot be strong.” She went on to talk about the importance of taking care of the issue now, rather than letting it build up in the future.

Other topics that the Senator spoke about were immigration reform, health care, climate change, tariffs, and social security.

While answering a question from the audience about social security, Sen. Klobuchar included retirement savings into her answer to make sure the Politics & Eggs audience was aware of how many people have no savings, which is 49 million. Continuing the conversation about savings, she stated that the average savings for retirement is around $600,000 and lower, but if companies were to contribute 50 cents an hour to each worker’s 401(k), she believed it would help every side of the situation and could improve the retirement savings issues.

In her ending remarks, Sen. Klobuchar grabbed the audience back in by stating that, “Instead of everyone looking down at their phones all the time surrounded by friends and family, they should all be looking up and speaking to one another, sharing ideas and opinions even when the thoughts are different.”