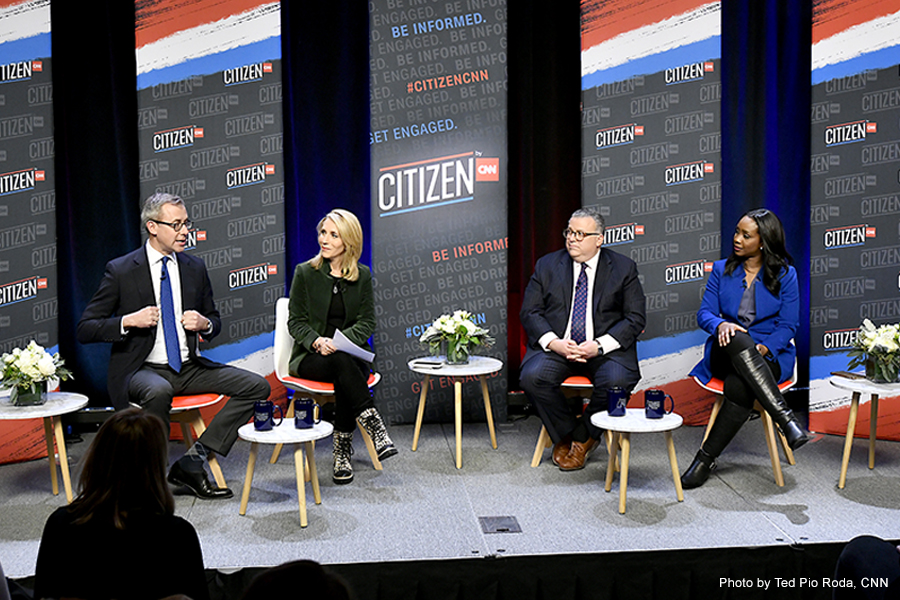 The panel discussed the outlook of the election thus far and takeaways from the Iowa caucuses. Despite the delayed results, Vermont Senator Bernie Sanders and former South Bend, Ind. Mayor Pete Buttigieg each received the most votes. Buttigieg and Sanders tied with a 26.2% vote count, but Buttigieg received 13 delegates and Sanders trailed at 12.

Sanders won the New Hampshire primary in 2016. One day after CITIZEN by CNN, Sanders took a second victory for the 2020 New Hampshire primary. Buttigieg came in second, with 24.4% of the vote, compared to Sanders’ 25.7%. However, the panelists remarked that while Sanders offers a new direction, he is hardly a new face.

During the Feb. 7 debate at Saint Anselm College, Buttigieg attacked Sanders on his Medicare for All plan. On the campaign trail in New Hampshire, the panelists said that Buttigieg chose to fight Sanders on the issues yet again, saying “your taxes are going to go up if you make $29,000 a year or more.”

The panelists brought up the fact that key Democrats, Speaker of the House Nancy Pelosi and New York Senator Chuck Schumer, are pushing health care to the media. Health care is made more prominent as candidates make health care arguments against each other on whether America is ready for the progressive “Medicare for All” plan. Panelists agreed that, “Health care is where things start to blow up.” Despite candidates' mixed views on a single-payer health care plan, approximately 60% of Democratic Iowa Caucus-goers supported “Medicare for All.”

While health care has been the issue covered most by media, Bash said that in addition to health care, the climate crisis, gun laws, and homeland security are top issues for voters. Bash remarked that this list is much different from candidates in 2016, most likely because there is a larger field of progressive candidates, such as Bernie Sanders and Massachusetts Senator Elizabeth Warren. Both have distanced themselves from other candidates on their progressive ideas such as free college and “Medicare for All.”

After seeing Warren at a Rochester event, Zeleny could see that she lost her usual stamina and energy. This was seen with the eventual New Hampshire primary, as Warren came in fourth with 9.2% of the vote behind Minnesota Senator Amy Klobuchar with 19.8% of the vote.

After finishing fifth in the Iowa Caucuses, Klobuchar was seen as a second-tier candidate. However, Klobuchar gained the traction she needed in New Hampshire after a strong performance at the Feb. 7 debate. With more women in the race, questions such as, “What is she wearing?” were more of an issue in 2016, with Hillary Clinton as the only female candidate. However, panelists agreed that both “Warren and Klobuchar are not afraid to lean into an issue they think is sexist.”

With more women in the race than last cycle, Phillip asked, “Can [either] woman candidate beat Donald Trump?” However, there was no mention of Hawaiian Congresswoman Tulsi Gabbard, who is still in the race but was not able to participate in a New Hampshire CNN town hall.

Some voters at the CITIZEN by CNN event were angered there was no mention of Gabbard, who goes against the left’s typical anti-war policies and Democratic establishment. Some may argue that those who are more moderate and go with the status-quo of the Democratic establishment, like Pete Buttigieg or former Vice President Joe Biden, are more electable. However, panelists said the biggest challenge is whether Buttigieg and Biden can build a Democratic coalition.

In the end, panelists agreed that there is no definition of electability in this race. Voters are staying undecided for longer, so the final decision is often based on who their neighbor is going to vote for.

When the decision is finally made, the panelists discussed the chances President Trump will debate the eventual Democratic nominee. Phillip said that the chance of Trump not participating “is at least 50/50.” However, a debate may be something the president can’t resist.

Bash made the point that, “one of the big factors is who [Trump] is going to be debating [and] standing on stage with someone who isn't as physically big as him.” Panelists referred to New York City Mayor Mike Bloomberg or Pete Buttigieg, both of whom are 5’8" compared to Trump’s 6’3" stature.

Despite who the nominee becomes, all panelists agreed that working for CNN and “having a front row seat to history is such a privilege.”