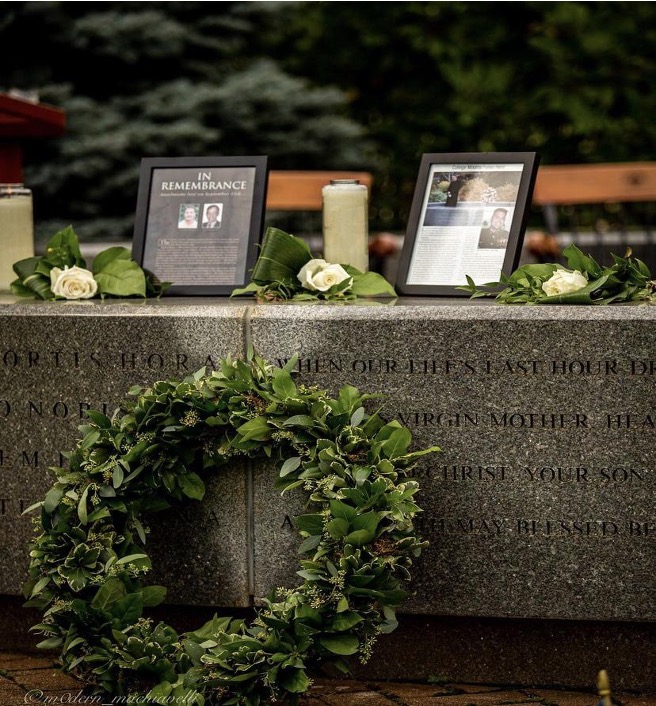 On September 10, 2021, Saint Anselm College observed the twentieth anniversary of the September 11th attacks. On behalf of Saint Anselm College President Joseph Favazza, the institution sought to “honor the memory of those who lost their lives” twenty-years ago through two commemorative events, with the hopes of “honor[ing] the men and women” who exhibited heroism, “courage, and valor” in their response to helping those in need.

The Abbey Church hosted a “Mass of Remembrance” earlier in the morning, with The Very Reverend Jonathan P. DeFelice, O.S.B., President Emeritus as the celebrant and homilist. The Mass honored alumni who lost their lives that day: Richard Keane, class of ’69, and Stephen Roach, class of ’86. This service also recognized Marine Captain Kyle Van De Giesen, who was killed in action as a result of a helicopter crash in Afghanistan. Captain Van De Giesen, class of ‘02, joined the Marine Corps following his graduation from Saint Anselm College in response to the attacks.

Following the mass, the college hosted a commemorative service at 12:30. This ceremony was held on the lawn of Alumni Hall, at the Veterans Memorial. A vast array of audience members were in attendance, including staff and faculty members, as well as students between the classes of 2022 through 2025, their peers and family members, and student/faculty first responders.

Opening remarks were given by Senior Vice President James F. Flanagan, who welcomed attendees. Flanagan began with the assertion that each alumnus deceased in the tragedy-maintained characters of “loyal Anselmians”, praising each victim for their hard-working nature. He continued by highlighting The Richard M. Keane Foundation, which was established with the help of Keane’s wife, Judy, to create a 9/11 Memorial Sports Center. Flanagan concluded his statements by emphasizing the ideal of “always remembering” the events of September 11th, calling upon the college community to continue their support of our first responders.

An Invocation prayer was subsequently led by Dr. Susan S. Gabert, Assistant Dean of Students and Director of Campus Ministry. Saint Anselm College student, Lillian Strang ‘22, followed this prayer with a rendition of the National Anthem.

Dr. Joseph A. Favazza, President of Saint Anselm College spoke next, echoing Flanagan’s assertion to not forget these events; Favazza citing an importance of “not forgetting” our community members’ sacrifice. The President concluded his speech with thanks to the college’s coordination team, Vice President Flanagan, Fr. Bennett, and guest speaker Kevin Ryan, of which the commemoration would not be possible without.

The ceremony allowed attendees the experience of listening to Kevin Ryan, class of ‘94. Ryan, a Saint Anselm alum, depicted his personal connection to the terrorist attacks twenty-years prior; Orio Palmer, Ryan’s cousin, was a firefighter of the New York Fire Department on September 11, 2001, who courageously risked his life trying to save others. Palmer was tragically killed by these attacks. Ryan honored Palmer’s memory, remembering him as a loving husband and father to three children. Palmer, an accomplished man in the field of fire safety, always exhibited an “insatiable thirst to learn”, according to his cousin Ryan. In his powerful testimony, Ryan highlights Palmer’s favorite motto: to truly “live while you are alive”.

This event continued with Student Government President Richard Flandreau and Vice President Kevin B. Chrisom enacting the Laying of the Wreath at the Veterans Memorial, in tribute to military members and first responders.

The penultimate statement was a Benediction delivered by the Right Reverend Mark A. Cooper, Abbot of Saint Anselm Abbey and Chancellor of the College. Following this prayer of healing and strength, the Saint Anselm College Schola, alongside attendees, collectively concluded the ceremony with a rendition of “America the Beautiful”, finalizing the service with an uplifting tone.