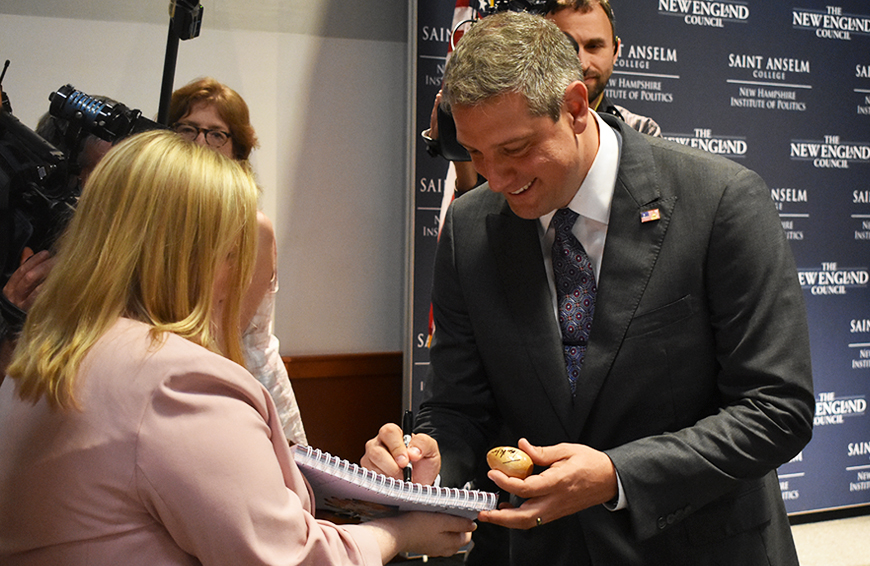 On June 11, Congressman Tim Ryan (D-OH) spoke at Politics & Eggs at the New Hampshire Institute of Politics (NHIOP). As the representative for Ohio’s 13th congressional district, Ryan has decided that he wants to make changes in the United States. Starting his campaign speech with industrialization and ending on the topic of mental health in schools, the congressman said he's ready to make “real solutions that get to the heart of the matter.”

One of the points he reiterated throughout his speech was, “Of all of our problems, before deciding between Democrat or Republican parties, you are American.” This brought the audience together under the idea of being a team despite the differences among parties.

On the topic of industrialization, Ryan made sure that everyone in the audience felt a connection to his story. Talking about his family friends who lost their jobs without notice and didn’t know whether or not they had to move, he told the audience, “These communities are closer to home than you would think.”

His plans include a new industrial policy that would be focused on bringing jobs China back to America from China. He wants to “drive the jobs to everyone that needs them, focusing in on the ‘forgotten people,’” whom he believes are veterans, African Americans, and those in poverty.

Ryan also spoke about the healthcare system, the environment, and education.

He announced in his speech that if he were to be elected, he would focus heavily on education and would be known as the “education president.”

His ideas to make a difference in the education department include mental health counselors in every school to help students recover from the trauma that they experience at home. Other things he wants schools to start incorporating into their way of teaching would be meditation and acupuncture, for those who need more than just counseling and have issues focusing when attending school.

To end his Politics & Eggs, he reiterated a quote by John F. Kennedy that was about stopping the fighting and instead coming together over issues. Ryan ended his quote by saying, “We must make America what we want it to be.”