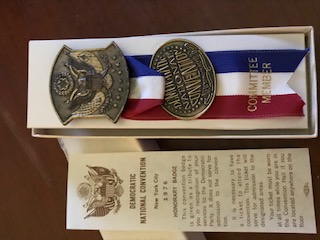 1976 proved to be a contentious election year. Nixon had resigned in disgrace four years earlier, the economy was in decline, and Gerald Ford’s presidency was stagnating. Thus, with mounting public distaste, challengers arose on all sides.

First, on July 12 of the year, the Democrats held their convention in New York City. Ten candidates vied for nomination, among them was Ellen McCormack an anti-abortionist and former Georgia governor Jimmy Carter. Carter seemed the unlikely choice due to his obscurity. However, Because he was an outsider, Carter had campaigned on an “I can fix Washington D.C” platform. He was able to “out-hustle” his opponents, gathering more delegates from a wider range of states. This support won him over half the primaries. At the convention, Carter’s support won him important delegates, and by using democratic rules on delegates, became the front runner and won nomination on the first ballot. He chose Sen. Walter Mondale as his running mate.

Later, in the Republican National Convention held August 19, Ford went up against Ronald Reagan, the former governor of California and strong conservative. In the primaries, the two candidates had exchanged victories leading up to a tense convention. Despite the Republican’s distaste for Ford, he still entered with an advantage. By coaxing on-the-fence republicans with visits to the White House, appearances in their state, and Patronage positions, Ford was able to capture important states. Ultimately, Ford squeaked by Reagan on the first ballot with 60 delegates winning the nomination. Having dropped Nelson Rockefeller, he selected Sen. Robert Dole as his Vice President.