A Conversation with General David Petraeus: The State of Our Nation and the World 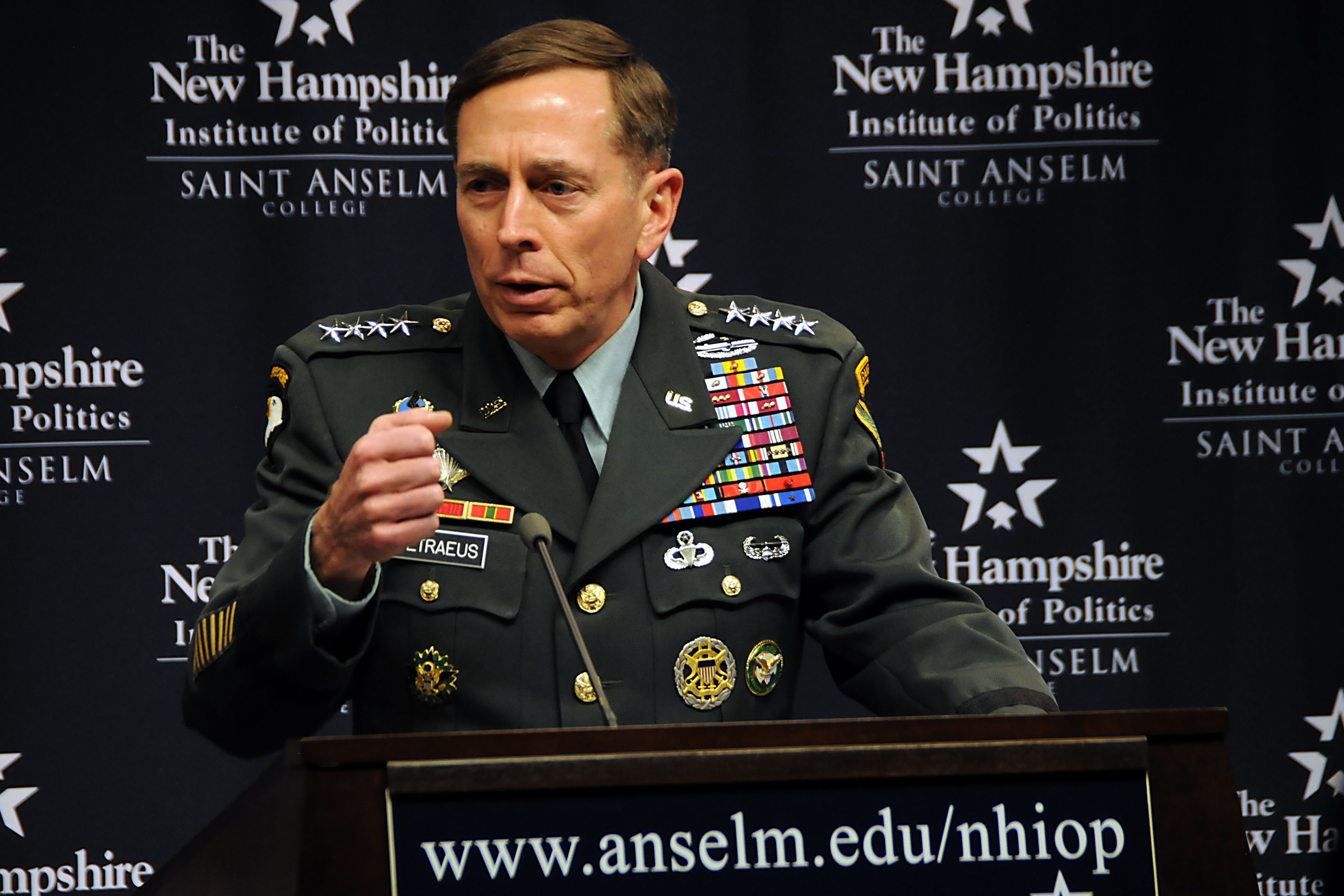 On February 3, 2022,  the New Hampshire Institute of Politics welcomed back former CIA Director Gen. David H. Petraeus, who joined the Institute virtually for a moderated discussion on the “State of The World,” and our nation alike. Gen. Petraeus previously spoke at the Institute on March 24, 2010, sharing his insights on U.S. involvement in Afghanistan, Iraq, and the global “War on Terror.”

Gen. David H. Petraeus is a retired United States Army General and public official, who served as the Director the the United States Central Intelligence Agency under President Barack Obama from 2011-2012. Before his directorship of the CIA, Gen. Petraeus served in the U.S. Army for thirty-seven years, later overseeing coalition forces in Iraq, and serving as the commander for U.S. Forces in Afghanistan.

The Institute also welcomed Phil Taub, Corporate M&A Partner, Nixon Peabody, LLP; Taub is also the co-founder and President of the Board of Swim With A Mission, Inc., a charity dedicated to raising money to support American Veterans in need. Taub spoke alongside Gen. Petraeus, serving as the event moderator.

The webinar commenced with statements from Neil Levesque, the executive director of the New Hampshire Institute of Politics at Saint Anselm. Afterwards, Taub continued, formally introducing Gen. Petraeus as a “great American,” informing viewers on his status as Chairman of the global KKR Institute, and praising his military service, which “culminated in six consecutive commands” throughout the Middle East. Taub finally praised Gen. Petraeus’ success for serving as CIA director during the tumultuous “War on Terror.”

Upon remembering his previous visit to the Institute 12 years prior, Gen. Petraeus confirmed that he “never intended to run for public office,” and still does not have the intention to do so.

Engaging with the subject of Petraeus’ involvement in Iraq and Afghanistan, Taub inquired into the General’s thoughts on the “hasty” withdrawal of U.S. forces from Afghanistan this past August. Petraeus served as the CIA director “at the height of the war” during the Obama Administration, and describes that, “after in-depth policy review in 2009,” a turning point occurred in managing the conflict; it took until 2010 to hone the trajectory of actions in Afghanistan.

He further notes that Afghanistan was “much, much more challenging” than Iraq, which, although having a “vastly greater amount of violence,” had the ability to generate more economic revenue from oil, better infrastructure, and education and literacy rates in comparison to Afghanistan. Ultimately, there was a “better chance” of reforming the former, especially considering the latter also faced threats from the Taliban, al-Qaeda, etc. He remarks that the U.S. “could almost win in Iraq — but did not have that prospect in Afghanistan.” A plethora of “substantial challenges, dependent on managing situations” characterized the overall “War on Terror,” rather than a whole resolution.

While he notes his lack of  party affiliation, he expresses contempt with both current and former administration plans to withdraw early. “I fear we will come to regret this decision,” Petraeus stated, lamenting the “execution of the withdrawal” of American troops from Afghanistan. “It was heartbreaking, it was tragic, and in many cases disastrous,” concluded Petraeus.

“I’d be surprised to see us put boots on the ground there again,” responded Petraeus in regards to the prospect of a U.S. return to the country. But “it is not inconceivable to see forces there,” he acknowledges.

In shifting the conversation to Russia and the Ukraine, Petraeus comments on Vladimir Putin.

“He very much wants Ukraine to fail,” he notes, and further elaborates on Putin’s desires to reclaim the “historic” makeup of Russia that encapsulates Ukraine, to perhaps “reassemble to Soviet Union,” embrace Belarus, and assert authority and dominance over the global stage.

“He fears a successful democracy, and a successful market economy in the Ukraine because it reminds his people what Russia is not.”

The topic subsequently shifted to China, Petraeus remarking that appropriate collaboration with the nation is possible in regards to climate change and coronavirus, given the responsibility of both countries as dominant figures. “There should be necessary distancing,” however, between the U.S. and China, in consideration of the recent conflict between China and Taiwan.

Taub continued guiding the conversation, asking Petraeus for his insights on the current threat of COVID-19. The General praised the “bipartisan” nature of the U.S. at the moment, and condemned the “politicization” of messages regarding the pandemic, shifting the greater focus of health and safety to one of sensationalism.

The closure of the webinar with Taub and Petraeus addressed questions on what makes for great leadership and success. Petraeus emphasizes a fundamentally critical principle that Taub echoed in summary: “we learn more lessons from our failures rather than our successes,” a poignant message to leave the Saint Anselm students with.