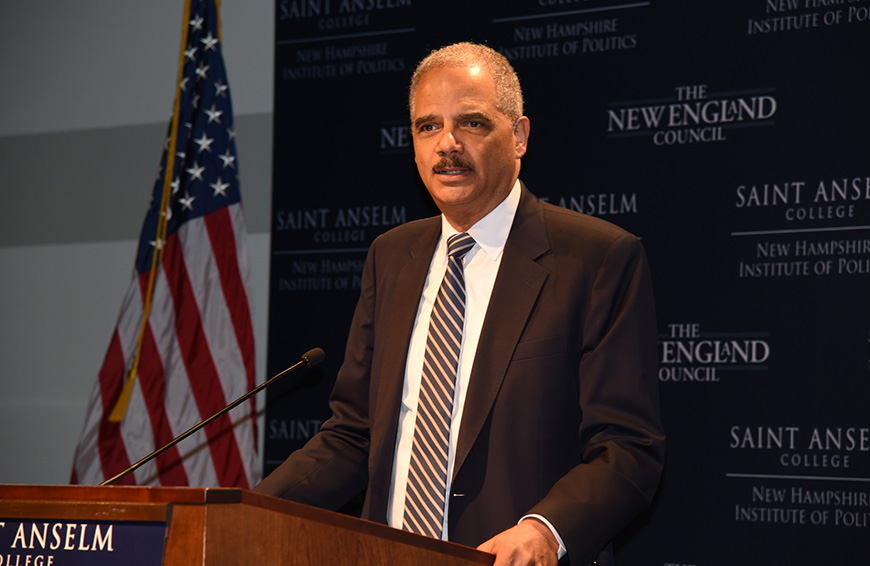 Former Attorney General Eric Holder made his way to the first-in-the-nation primary state for a Politics & Eggs breakfast on June 1st, presented by the New Hampshire Institute of Politics (NHIOP) and the New England Council.

Holder served as the 82nd Attorney General of the United States under the Obama administration, and is now the chairman of the National Democratic Redistricting Committee (NDRC). He explained that the NDRC works with grassroots organizations to bring awareness to the issue of gerrymandering.

“I think our democracy is under attack,” began Holder in his Politics & Eggs speech, saying these “attacks” come in the forms of gerrymandering and voter suppression. His organization is working to prevent gerrymandering in congressional and legislative districts, because “it leads to misrepresentation as opposed to representation.”

Addressing the speculation of a 2020 presidential run ahead of his visit, Holder told the crowd, “People have some assumptions about why I’m here in New Hampshire. My reason for being here today is to talk about the NDRC and also to talk about some of the issues that I see in New Hampshire.” Later in his speech, he told the crowd, “The presidency is something I’m considering, but I’ll have to make a decision on that sometime next year.”

“We’re up here to try to have an influence on the state legislative races and also your governor races,” said the former general in reference to gerrymandering concerns in the swing state of New Hampshire, particularly in District 2. He stated, “You see these weirdly drawn districts to try to come up with a partisan result.”

In the Q&A following his speech, Holder offered comments on the importance of the arts, reform of recent tax cuts, and the need for wage increases. On the president’s power to pardon, Holder hopes he’ll use it “so that people who are really deserving of mercy, get it.”

Dr. Steven DiSalvo, Saint Anselm College president, asked about voting rights for college students who go to school in New Hampshire but come from out of state. Noting that if they work and live in the state eight or nine months a year, “They ought to be considered New Hampshire residents for voting purposes,” answered Holder.

The former General concluded his Politics & Eggs speech hopeful that those in attendance are actively involved American citizens and willing to fight for justice.

The New England Council, a Politics & Eggs partner, is a non-partisan association of New England businesses, health and academic institutions, and private and public organizations. The goal of the Council is to promote economic growth across New England, build relationships between its members and federal policy makers, and to support federal policies which benefit region. The organization works with both Democrats and Republicans but does not endorse either political party.