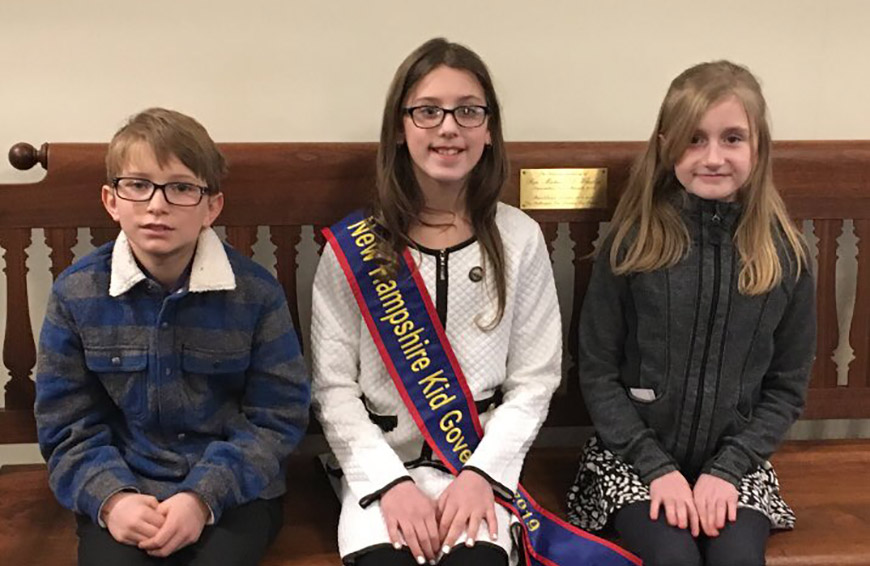 In collaboration with the New Hampshire Center for Civic Engagement, The New Hampshire Institute of Politics (NHIOP) is pleased to announce the launch of New Hampshire's Kid Governor. The program is designed to coincide with Election Day in November where classes have the option to vote, nominate a candidate, or both.

On November 5, the NHIOP became a real-life voting ward for the three fifth-grade classes who nominated a candidate. The classes were shown each candidate's campaign video with platforms discussing animal cruelty, poverty, and food waste. Afterwards, the students cast their ballots for New Hampshire's very first Kid Governor.

One week later, a customary assembly was called at Sunset Heights Elementary to discuss the yearly Thanksgiving food drive, but what the students didn’t know was that the Kid Governor election results were about to be revealed. A teacher took to the stage to announce New Hampshire’s first Kid Governor, Lola Giannelli. Giannelli then gave a speech to the entire school about all the programs she plans to input to help end animal cruelty in New Hampshire.

Most recently, on January 18, Lola Giannelli was sworn-in as New Hampshire’s first Kid Governor by New Hampshire's Chief Justice Robert Lynn. Kid Governor Giannelli then administered the oath to her Kid executive councilors, Ben Vachon and Evelyn Ellis-Haines. She gave an empowering ceremonial address that captivated the students as well as the legislators in attendance.

During her year long term, Kid Governor Giannelli hopes to create after school programs where students help make toys for animal shelters, volunteer for the local animal shelter, and start a petition for New Hampshire to adopt a law similar to Bill AB485 passed in California that forbids pet stores from selling animals from mills.

The ceremony ended with an official State Senate resolution delivered by State Senator Cindy Rosenwald of Nashua. Afterwards, Kid Governor Giannelli and her Kid executive councilors held a press conference further discussing Giannelli's platform. All three students are very excited to begin their journey to help stop animal cruelty. Giannelli not only plans on tackling the issue of animal cruelty but also poverty, an important issue to Ellis-Haines, in New Hampshire. Both plan on volunteering at local food shelters and creating a winter clothing drive to help those in poverty combat the cold.