The First 100 Days of a Presidency: How Important Are They? 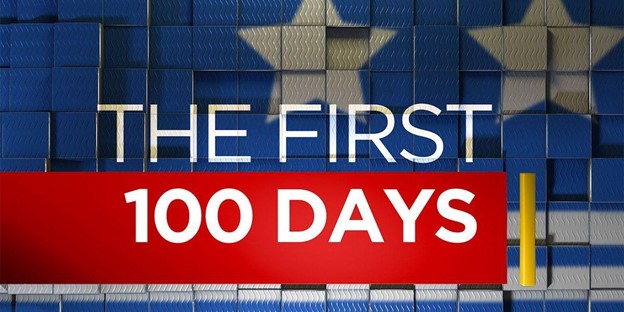 We’ve all heard it. “What will Biden do in his first 100 days in office?” This is a popular question posed by many onlookers of the United States’ political sphere, but where does it come from? The idea of a President’s first one hundred days in office being the indicator of how well their full term will be is a relatively new idea. President Franklin Roosevelt introduced the phrase in one of his token fireside chats on July 24, 1933 by saying, “first, I think that we all wanted the opportunity of a little quiet thought to examine and assimilate in a mental picture the crowding events of the hundred days which had been devoted to the starting of the wheels of the New Deal.” This is in reference to the ridiculously efficient and productive one hundred days to begin his presidency. In his inaugural address he made note of his efforts in speedy legislating by saying, “I am prepared under my constitutional duty to recommend the measures that a stricken nation in the midst of a stricken world may require. These measures, or such other measures as the Congress may build out of its experience and wisdom, I shall seek, within my constitutional authority, to bring to speedy adoption.” In the period from March 4 through June 11, FDR and the Congress passed 15 major bills to combat the economic and labor crises in the United States.

Currently many historians use this metric to determine how much a president has gotten done or will get done in their first term in office. This concept is not uniformly accepted by all historians, however. Even some presidents find the metric useless as JFK alluded in his Inaugural Address “All this will not be finished in the first one hundred days. Nor will it be finished in the first one thousand days, nor in the life of this Administration, nor even perhaps in our lifetime on this planet. But let us begin.” The controversy behind a president’s first one hundred days being the indicator of success pushes forward even today as modern presidents pale in comparison to the level of success FDR was able to push through in the early stage of his presidency.

FiveThirtyEight has put together some fantastic graphics showcasing how the last dozen presidents first hundred days went (Figures 1 and 2). As we can see, no president has even passed half as many laws as FDR since Truman did in the following presidency. This level of productivity is unmatched in American History. This may just be in part due to the unprecedented challenges that FDR was facing when he took office and therefore needed to act fast right out of the gate. Could any president even come close to this level of effectiveness in the modern political era?

A great deal of what a president focuses on in their first months in office boils down to what they inherited from the previous administration. Very little new material is discussed that does not correlate to the state of the nation prior to their rise to office. Throughout the next few weeks, the NHIOP blog will look at some of the more interesting takes on a president’s first one hundred days in office. Looking into how a president’s first one hundred days is spent while in wartime, we will dive into a comparison between Harry Truman and Gerald Ford’s presidencies. We will look at how current President Joe Biden’s responses to the economy and the global pandemic during COVID-19 may or may not mirror those responses from President Warren G. Harding when he took office amidst the Spanish Flu. We will also explore how a president’s approval rating may coincide with the number of executive orders he signs in the first one hundred days. Lastly, we will take a deeper look at what Joe Biden was able to get done in his first one hundred days and if he was able to make a “return to normalcy” as he has so often been pushing.