Governor Jay Inslee at "Conversation with the Candidate" 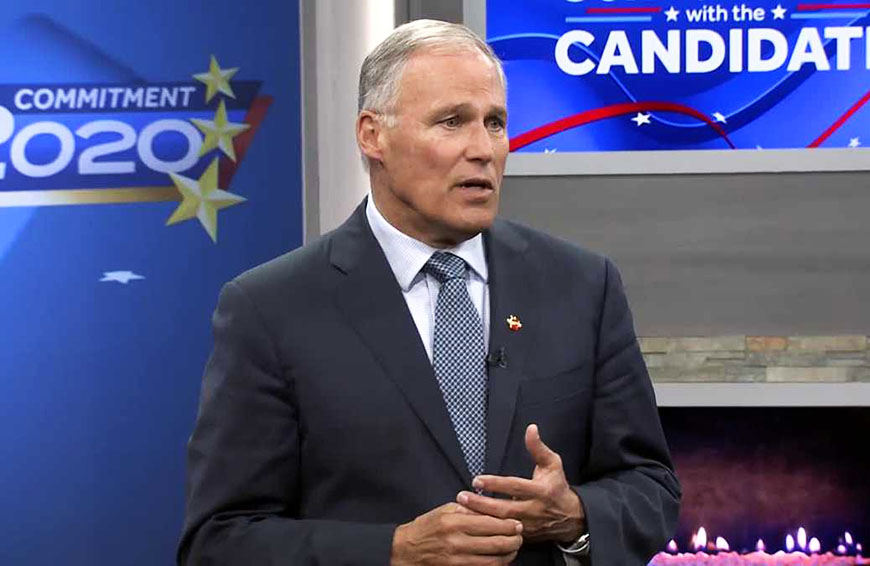 The climate president. Throughout his “Conversation with the Candidate" at WMUR on June 12, Governor of Washington, Jay Inslee, shared his message about climate change.

Talking about other topics such as mental health, health care, economics, and domestic policies, Inslee made sure the audience was aware that he is a progressive governor in the state of Washington, as well as one of the more progressive presidential candidates in the race.

When discussing his goals for the future, he spoke about President Donald Trump and the ways in which he would change this presidency. Inslee spoke about how he had sued the president 21 times, and that every time this occurred he always beat Trump. Inslee stated that he was “confident in beating Donald Trump” and that he wants to “make sure Donald Trump is a blip in history.” He also talked about Washington becoming a model and a template for the rest of the country because Inslee said that their economy is the best in the nation, and that they are starting to respond to climate change issues by making changes within their society.

Specifically on climate change, Inslee stated that his main goal was to make sure that the children of today live through the climate crisis. To make a difference in this arena, his ideas included energy efficient housing, de-carbonizing the economy, leaving coal and fossil fuels behind, and a 100 page proposal that he is working on which will be “the gold standard of all plans.”

While answering questions from the audience, Inslee spoke about his domestic policies that he has put into place in Washington other than climate change. From gender equity, to long term elder care and wage increases, he wanted to make sure that the audience saw that he cared about more than just climate change.

Some foreign affairs policies that he would want to achieve in his presidency if he were to win would be to restore firm alliances, then move on to have troops leave Afghanistan, and lastly reinstate the Iran deal.

Another subject that he felt strongly about in his “Conversation with the Candidate” was gun safety laws. Inslee said that he has already passed three gun safety laws and wants to continue to do so. Inslee stated that “too many guns are in the wrong hands” and that there needs to be some kind of common sense gun owner responsibility law that can stop people who shouldn’t have guns from buying them.

To end his “Conversation with the Candidate,” Inslee reiterated what he felt most strongly about, which was climate change and the proposal he is currently working on that he wants to pass in Congress.