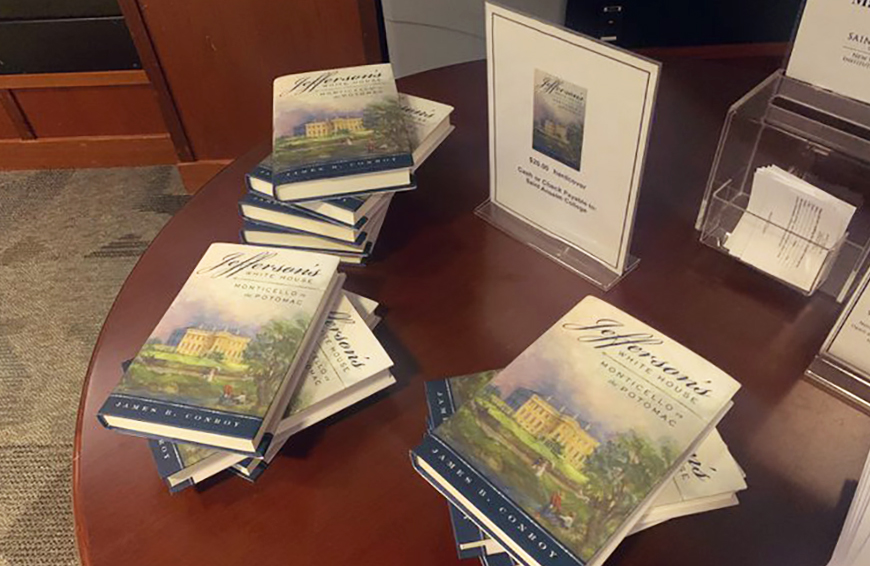 On February 25, author James B. Conroy spoke about the presidency of Thomas Jefferson and how he used the power of the office to bring the country together.

The event, which took place in the NHIOP auditorium as part of the Bookmark Series, was entitled "How Jefferson Used the White House as a Tool to Save Democracy" and gave Conroy the opportunity to talk about his third and newest book, Jefferson’s White House: Monticello on the Potomac.

Conroy began the talk by discussing how contemporary audiences remember Jefferson as a demigod and the “Pen of the Revolution” but “200 years create a distance between you and demigods.” Jefferson, Conroy noted was, like all people, “an imperfect human being.”

The time that Jefferson was in office was much like the present day, Conroy argued, with different groups “fighting over the soul of America.”

On one side was Jefferson and the Democratic-Republican Party, who wanted a weak federal government, more power given to the states, an agrarian based economy, and was pro-French. On the other side was the Federalist Party led by John Adams, and the right-wing High Federalists led by Alexander Hamilton.

Conroy remarked that it was funny that Hamilton is remembered as a man of the people even though he did not want to give most of “the people” the right to vote.

The capital of Jefferson’s time was described as being as wild as Kentucky with the only difference being “the soil wasn’t as good.” One British ambassador called Washington “six square miles of wild country.” According to Conroy, the capital was also isolated from the rest of the nation and the roads to it were poor.

In 1804, it took ten hours to get from Baltimore to the capital; nowadays it only takes an hour. According to Conroy, one did not go to DC unless one had to.

Jefferson was considered a man of the people as president. Whereas Washington and Adams enjoyed the trappings and symbols of a king, Jefferson always preferred modesty. For example, as president, he never rode in a coach, instead preferring to ride or walk and never with a guard.

Early in the morning, he would ride out to the towns nearby and talk with the people. This difference in personalities is even represented in how Washington and Jefferson are portrayed.

Whereas Washington is often pictured with heavenly light, red banners, and Greek columns, portraits of Jefferson are always very simple.

Conroy argued that Jefferson used the White House to unite the country by inviting people to dine with him. These “small parties” of fourteen people would be set around a round table with no one being at the head and everyone being equal.

Guests of Jefferson included Thomas Paine, author of Common Sense, John Quincy Adams, son of John Adams, and James Madison, who was said to look like “a country schoolteacher who was in mourning for one of his pupils who he whipped to death.”

At Jefferson’s parties, he would serve high French cuisine with the best wine in the country, if not the world.

Through meals at the White House, Jefferson was able to bring the country together by opening a dialogue. This, Conroy argued, steered the country away from a plutocracy and towards a democracy.