“Jimmy Carter and ‘The Year of the Evangelicals’ Reconsidered"

In October 1976, Newsweek magazine borrowed a phrase from pollster George Gallup and proclaimed that year the "Year of the Evangelicals." Evangelicals are a subset of Protestantism that emphasize an emotional conversion experience - being "born again" - and the need to evangelize others. Democratic presidential candidate Jimmy Carter made much of his claim to be born again, and spoke openly about his Southern Baptist faith. But even Republican Gerald Ford, an Episcopalian who was reluctant to talk about his faith, claimed to be a "born again" Christian. This phenomenon caught journalists by surprise, and they struggled to understand this new segment of the electorate, beginning at the top with Carter.

For much of the 2oth century, evangelical Protestants had retreated from political activity. What that Newsweek cover story revealed was that the election of 1976 had brought evangelicals back into the political arena. While many of these people supported Carter's candidacy and made the difference in his election, others supported Ford. It did not take long until these evangelicals became a political, cultural, and intellectual force. Even though many of them had voted for Carter in 1976 - after all, they thought he was one of them - by 1980, white evangelicals had soured on the Democratic incumbent in favor of the Republican Ronald Reagan. That relationship between the so-called Religious Right and the Republican Party continued through the 2016 election of Donald Trump.

With support from the Henry Luce Foundation's Theology Program, Br. Isaac Murphy, the Vice-President of Academic Affairs, the Norwin S. and Elizabeth N. Bean Foundation Distinguished Lecturer Series, and the Saint Anselm history and politics departments, on April 6, 7, and 8, the New Hampshire Institute of Politics hosted the conference, "Jimmy Carter and the 'Year of the Evanglicals' Reconsidered." That conference used the 1976 Newsweek cover story as a jumping off point to examine the role of evangelical Christians in public life in the late 20th century. 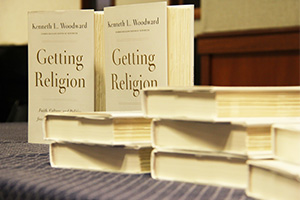 The conference included two public keynote addresses, the first by Randall Balmer of Dartmouth College and the second by Kenneth Woodward, the former religion editor of Newsweek magazine who wrote the October 1976 cover story. Professor Balmer traced the origins of the Religious Right back to opposition to the Internal Revenue Service's decision to remove tax-exempt status from private schools that continued racial discrimination, rather than to growing opposition to abortion rights and the Roe v. Wade Supreme Court decision (which is the conventional argument). Woodward reflected on the election of 1976 and many of the personalities involved in evangelicalism's political activity, which are discussed in his new book, "Getting Religion: Faith, Culture, and Politics From the Age of Eisenhower to the Era of Obama."

In addition to the public talks, an interdisciplinary group of international scholars participated in the conference. They presented their research on a variety of different topics, including feminism and Rosalynn Carter, the social vision of Habitat for Humanity, the born-again experience of former Black Panther Eldridge Cleaver, the relationship between evangelicals and Roman Catholics in the pro-life movement, the publicity surrounding Catherine Marshall's Christy novels, the "Jesus rock" of bands like Stryper, Dr. James Dobson and Focus on the Family, and 21st century evangelical support for Donald Trump.

Taken together, all the talks shed new light on the modern relationship between religion and politics and indicated that the scholarly study of the public role of Christianity has come a long way since Newsweek celebrated the re-emergence of that role. Conference participants anticipate that a book-length collection of essays will result from this event.