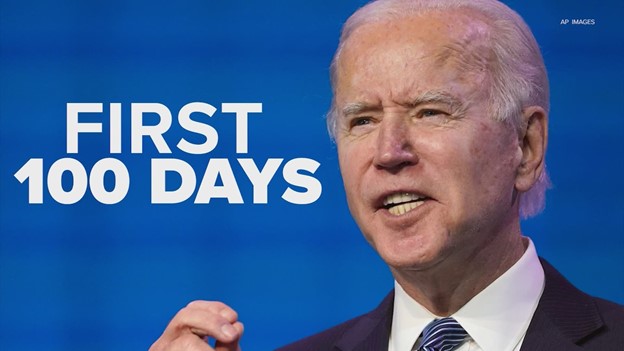 When President Joe Biden took office in January 2021 critics were already hopping on him to analyze what his plans would be in his first 100 days in office as with all newly elected presidents. This imposed milestone dates to FDR’s time in office when he promoted his New Deal. This standard of time isn’t always the most effective way to determine what a president’s time in office will hold, but nonetheless it garners a lot of attention. As Biden passes the 100-day margin on Thursday April 29, we look back at some of his major achievements, and his numbers compared to previous presidents.

President Biden has signed a total of 11 bills into law during his first 100 days, the fourth lowest one of any president since Roosevelt. Part of this likely boils down to the partisan polarization festering in the legislative branch. However, he likely will be remembered for passing the $1.9 trillion coronavirus relief package in March of this year. Along this vein, he has also seen a 73% drop in COVID rates across the country since taking office. One of his big pushes during this time has been to get vaccines to as many Americans as possible. He originally began with the mentality of under promising and overdelivering, and he has done just that. He promised that 100 million vaccines would be administered by his 100th day. He surpassed that number on day 58, and since then has administered over 200 million shots. He had hoped to have the vaccine available to all adults by May 1st at the latest.  Instead he was able to move that date up to April 19th. As of his 100th day, about 54% of the adult population have received at least one dose, while more than 95 million, or about 37% of the adult population, are now fully vaccinated.

It is not surprising that President Biden has also signed a relatively large number of executive orders in office. Sitting at 42 issued, he has signed the second most orders only behind FDR. This is in part due to the resurgence of executive order issuing in the White House in the past decade. With some of these orders he has followed through on campaign promises. He revoked the permit for the Keystone XL pipeline, issued a mask mandate on all federal properties. as well as banning evictions during the COVID pandemic. Not only has he pushed some of his own ideas forward, but he has revoked multiple pushes from the Trump administrations time in office. He rejoined both the Paris climate agreement and the World Health Organization almost instantly after taking office. According to the American President Project, Biden has undone 62 of the 219 Trump executive orders since taking office.

As of his 100th day, Biden’s job approval has been its highest at 53%. Already his popularity is higher than Trump on any single day of his presidency. This number however is still low compared to other presidents at this time in their term. Many agree that this is likely attributed to partisanship.  He has the approval of over 90% of Democrats and around 10% of Republicans. All in all, it is hard to argue that his first 100 days in office have been a failure. We have seen a decrease in unemployment rates, the pandemic’s response being taken seriously, and campaign promises being upheld. To most, this would be considered a success, but it is only the beginning. He still has over 1300 days left in his first term.  We’ll be watching to see how he follows through on other promises made along the campaign trail.