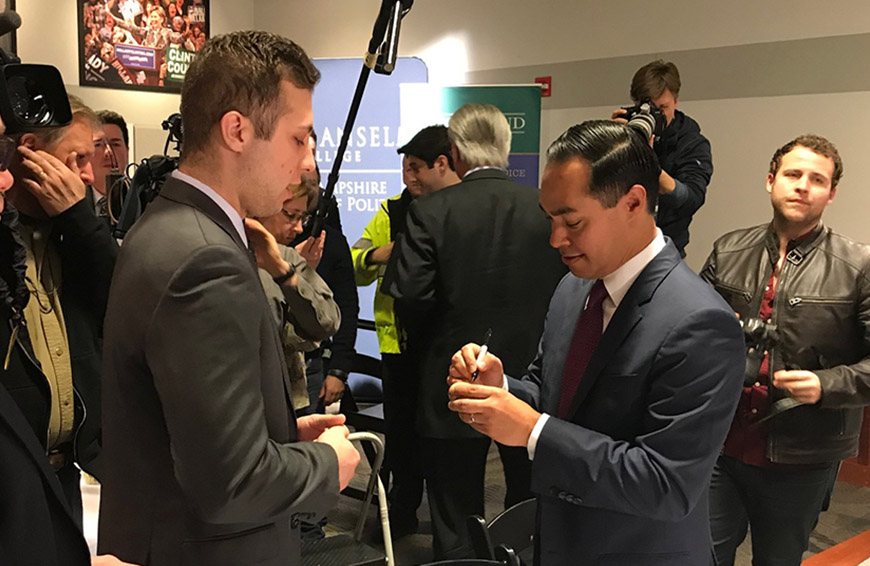 Julian Castro has one vision in mind for his 2020 presidential run: to make 21st century America “the smartest, healthiest, fairest, most prosperous nation on Earth.”

Castro, who served as the United States Secretary of Housing and Urban Development under the Obama administration from 2014-2017, made his second visit to the New Hampshire Institute of Politics for Politics & Eggs on January 16. His first visit came exactly one year ago for a student panel with NHIOP Ambassadors.

Secretary Castro’s vision serves as the basis for his own success story, as he was raised by a single mother and grandmother. Castro said he and his brother, Joaquin, who served on the United States House of Representatives, had the chance to reach their own American dream.

During his speech, Castro outlined how he would complete his vision as president. To become the smartest nation on Earth, Castro focused on starting universal Pre-K for every American student. As mayor of his hometown San Antonio, Texas, he implemented the successful program “Pre-K 4 San Antonio,” a full day Pre-K program for San Antonio four-year-olds. For higher education, Castro envisions a tuition-free system of public colleges and universities.

Second, Castro’s plan is to pass Medicare for all. He cited how Medicare helped his grandmother, who lost a foot from the complications of diabetes.

Third, in order to make the United States the fairest nation on Earth, Castro plans to “reform and reimagine” the justice system and pass comprehensive immigration reform. Castro said the current administration chooses “cruelty over compassion,” [and] “politics over effectiveness.” The Secretary’s first visit since announcing his candidacy was to San Juan, Puerto Rico. His goal is to change the current climate by ensuring every single person counts.

Castro himself comes from a proud Latino family, and said, “We are united in this country not by how we look, but what we value.” He made his opinion clear that uniting instead of dividing people makes the American dream possible.

To conclude his speech, Castro said his first executive order as president would be to recommit the United States to the Paris Climate Accord. In addition to green jobs, he said affordable housing is the country’s vision to prosperity. He cited New England as having some of the least affordable housing in the country.

The 2020 election is already a wide field of candidates, from Andrew Yang, John Delaney, Elizabeth Warren, Tulsi Gabbard, Kirsten Gillibrand, to Kamala Harris. Maryland Representative John Delaney will be the next 2020 candidate to visit NHIOP for Politics and Eggs.