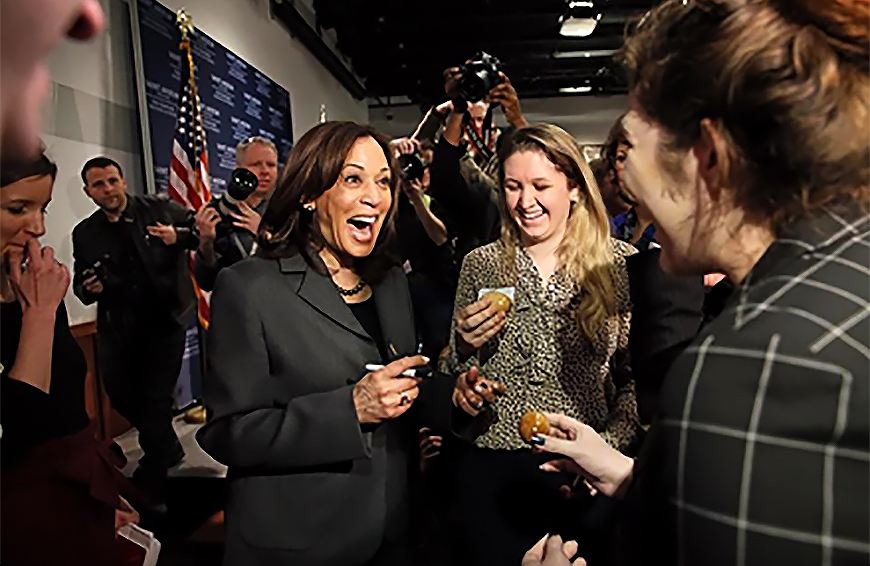 The New Hampshire Institute of Politics (NHIOP) hosted U.S. Senator Kamala Harris (D-CA) for a Politics & Eggs event on February 19, in conjunction with the New England Council. Harris arrived around 9 a.m., met with members of the Council and students, and signed some of the historic wooden eggs before going out to address the full audience.

She opened her speech by addressing questions that she would not seriously contest the New Hampshire primary. Harris denied these rumors, saying she plans on competing in New Hampshire and that she intends to do “very well” in the nation’s first primary.

Harris addressed affiliates and members of the New England Council as well as students of Saint Anselm College before taking questions. Her remarks centered on three issues: middle-class tax relief, education reform, and climate change. She promised that, as a candidate for president, she would “speak truths” on the trail and be honest with the American people.

When talking about climate change, Harris grew particularly passionate. “Look, I care about this issue not because I have any particular desire to hug a tree, but I have a very strong desire to hug a healthy baby,” she told the crowd.

She also fielded various questions from the audience, addressing her desire to modernize the economy and prevent a future government shutdown.

After the event, Harris went down the hall to the Presidential Library to film an interview with NBC News’ Kasie Hunt. During her interview with Hunt, the senator reiterated her support for Medicare for All but said it was not “socialism.”

She explained further, “It’s about understanding that access to affordable health care should not be a privilege, it should be a right. It’s about understanding that in a democracy, and the way we have constructed our democracy, we at least in concept have said that your access to public education, public health or public safety should not be a function of how much money you have. But in America today, that’s not the case.”