My Week with NBC News 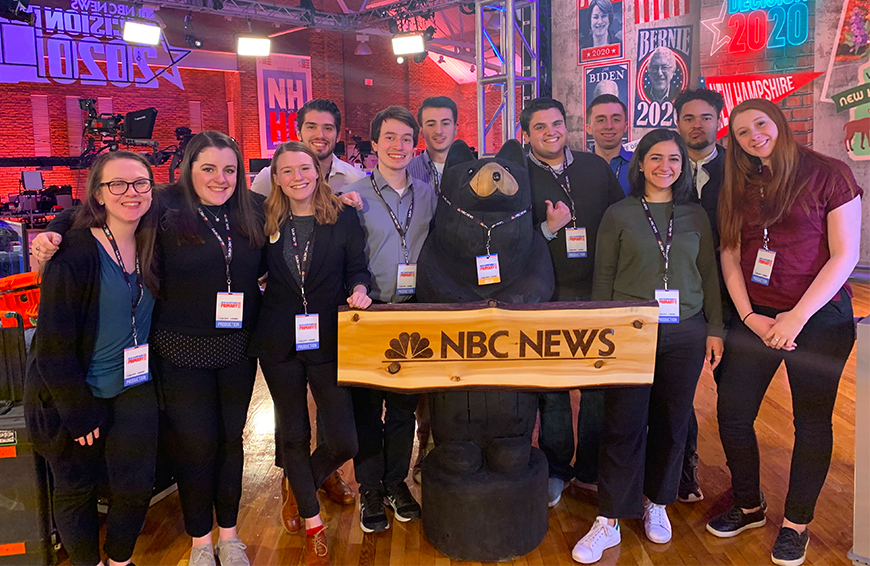 Ever since my first tour at Saint Anselm, I had heard about the grandeur of the New Hampshire presidential primary debates. Every student who attends Saint Anselm College is assured some part of the political action whenever the forefront politicians running for president descend upon New Hampshire.

This was one of my main reasons for choosing to attend Saint Anselm back when I was still a senior in high school. With the debate being held on campus every four years, I knew that this was a once-in-a-lifetime opportunity that I had to be a part of.

I had known early on that I wanted to study communication in college. So, when I heard that most students at Saint A’s get to work for major news networks during the primary season, I knew I would leap at the opportunity when the time came.

Now in my junior year, with not only a major in communication but also an added major in international relations, the time had come.

The announcement that the debate would be held on February 7 in the Sullivan Ice Arena came out and the media storm began. I decided to work for NBC as a runner, mainly because of my love for the news show Morning Joe, which has been me and my mom's favorite morning show for years.

I don’t think that any of us students, who had never seen the debates on campus before, were really prepared for the magnitude in which it would take over the campus. Not only the campus, but our lives.

My first day working for NBC, whose media studio was stationed at the DoubleTree Hotel in downtown Manchester, was a slow day — but it wouldn’t stay like that for long.

In the days after the debate, the real campaigning began in New Hampshire, with politicians trying to get last minute votes. With this campaigning came show after show after show in the Manchester NBC studio. To put into perspective how much time this really takes up, in the five days that I worked for NBC, I clocked in over 50 hours.

This may sound like a cruel punishment to some, considering I still attended all my classes in between shifts, but I can assure you, it was well worth it. I got to see firsthand the production side of putting together a primetime news show, something that I had always been interested in. My daily tasks consisted of helping prime the set for shows, getting graphics for the background, helping escort guests to different live shots, and even sometimes joining the live audience during a show.

It was such a fast-paced work environment, which for some may seem stressful, but it gave me a sort of adrenaline rush.

My favorite part of my week as a runner for NBC was also my least favorite part. I had been scheduled to specifically help with the Morning Joe show on Monday and Tuesday morning. These were the last two mornings before the voting in New Hampshire began, so the schedule was sure to hold some major star power. However, the arrival time for Morning Joe workers was 3:45 a.m. If you just physically grimaced as much as I did when I first heard this, then I think you can understand my struggle having to set an alarm for 2 a.m. Never in my whole life have I been awake so early in the morning with makeup and a blazer on. Yet, I never felt as tired as I knew my body had to be.

As I was working, I got to meet producers from the show as well as candidates Joe Biden, Pete Buttigieg, and Amy Klobuchar among others. So many influential newscasters and journalists walked by me I almost became desensitized to it.

Though I am now convinced that most NBC production workers never actually sleep, I can understand why they are so passionate about what they do. Even having a little part in the process that creates a live show is something that I am proud of.

It’s safe to say that the praise for the opportunities that would be offered at Saint Anselm during the primary season did not disappoint.

I have always loved politics and staying in touch with the news. I now know that this is something I could do later in my career, but perhaps not in the exact way I was working this week.

I have always been a bookworm, having less of an eye for aesthetic detail. Set pieces and lighting will never be my specialty, even as important as I now know this process to be. Being a part of the actual journalism and news collection that makes up the show segments is the dream. Nonetheless, this world of news and politics might sound like a nightmare to most, but I’m so glad that Saint Anselm and the NHIOP ambassador program gave me the opportunity to be a part of it.