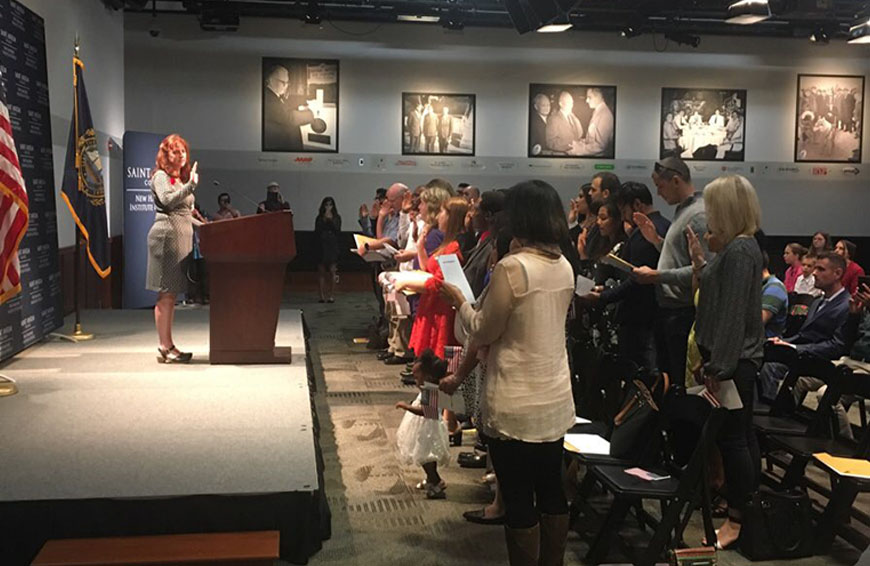 Junior politics major and NHIOP Ambassador, Phillip Dragone, started the ceremony with the national anthem. Clough then did a call of the countries from which these new citizens came from. Applicants came from all over the globe: Australia, Bhutan, Bosnia and Herzegovina, Columbia, Democratic Republic of the Congo, Georgia, India, Indonesia, Iraq, Ireland, Jamaica, Mexico, Moldova, Peru, Romania, Somalia, Thailand, Togo, and the United Kingdom. Once Field Office Director of USCIS gave the oath of allegiance, the New Hampshire received 28 new U.S. citizens.

Neil Levesque, executive director of the NHIOP, welcomed the new citizens. The NHIOP is the political hub of New Hampshire, and Levesque remarked on the activity of the Institute thus far as the state approaches the February presidential primary. He encouraged them that even if they are new, they should still “vote and participate in this democracy.” Part of the Institute’s mission is to allow for open discussion and empower others to be involved in civic life.

As these citizens finally have the chance to participate in the country’s democracy, Levesque remarked that our “flag sure means more than it did before.”

Sophomore politics major and NHIOP Ambassador, Collin McNaught, ended the ceremony with the Pledge of Allegiance, where all citizens could stand tall in a melting pot of cultural backgrounds and stories.