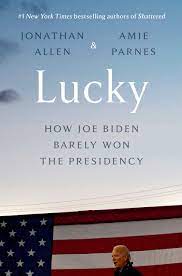 On April 8, the Institute of Politics hosted authors Amie Parnes and Jonathan Allen to discuss their new book, Lucky: How Joe Biden Barely Won the Presidency. Parnes is a senior correspondent at The Hill, a political news site based in Washington, D.C., and Allen is a political reporter and senior political analyst at NBC News.

The event was moderated by two student Ambassadors; Elizabeth Manning, a politics major in the class of 2022, and Marta Saravia, a behavioral neuroscience major, also in the Class of 2022. The discussion consisted of questions from the moderators, the audience, and other student ambassadors.

Parnes and Allen opened the discussion by telling the attendees what the goal of their book was; they wanted to bring readers insight into the Biden campaign, and tell the story of how Biden was able to win. They explained that they believed that nobody truly knew what happened during the election, and they wanted to show readers exactly that.

Lucky was not the first book that Parnes and Allen had written together. They have previously worked together to publish two books on Hillary Clinton; HRC: State Secrets and the Rebirth of Hillary Clinton, a semi-biographical book, and Shattered: Inside Hillary Clinton’s Doomed Campaign. According to them, all three of their books are connected in a way, and they all have similar goals: to put readers in the room and to make sure that they are part of the conversation.

Parnes then described what the process of writing the book was like, as it was different from previous writing experiences due to the Coronavirus pandemic. “Nothing could have prepared…” them for reporting on an election during a pandemic, Parnes said. She also added that it was difficult to conduct interviews over the phone instead of in person, making the process even more unusual. Another challenge the authors faced was Biden’s disappearance from the campaign trail due to the virus.

The authors were then asked a series of questions relating to the campaign trail and specific moments along the way. Because the book focused on multiple moments that were considered “lucky” for Biden, the authors were asked which moments really stood out to them. They were also asked about former President Barack Obama’s endorsement of Biden, and why they thought it came so late in the campaign.

Lucky: How Joe Biden Barely Won the Presidency is on sale now in most major booksellers. The next Bookmark Series event at the Institute of Politics will be held virtually on April 28, at 6 pm. The event will feature Carlos Lozada, who will discuss his book What Were We Thinking: A Brief Intellectual History of the Trump Era.