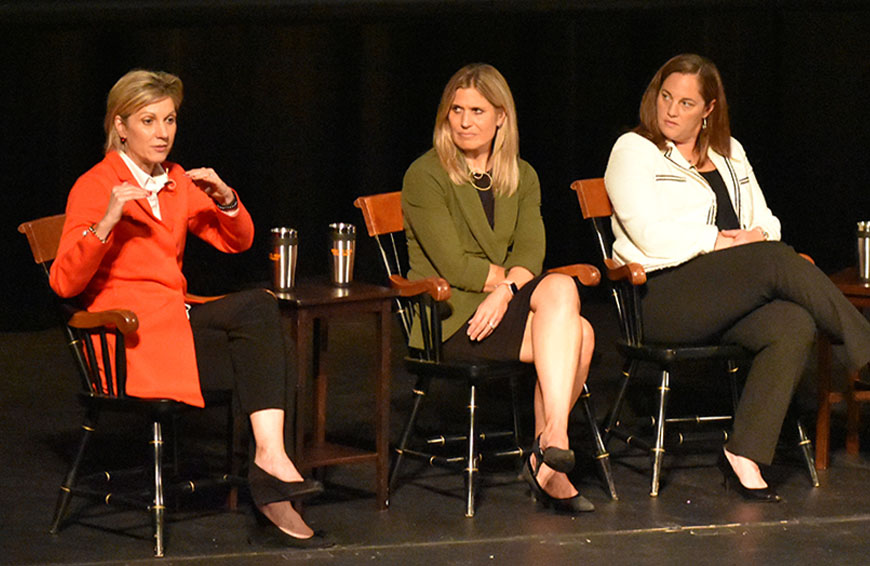 On October 10, the New Hampshire Institute of Politics, in association with the Bishop Guertin High School Girls' Basketball Team and SLC Group Holdings, hosted Woman-to-Woman, a female empowerment discussion. The event brought over 200 female athletes from across the state together to hear many different stories from influential women in New Hampshire. The night began in true basketball style, with a tip off. Aria O’Connell, a student at Bishop Guertin High School, took to the stage to explain the importance of this night and to introduce Senator Jeanne Shaheen to deliver remarks.

Senator Shaheen spoke about her personal experiences of embracing her femininity while playing sports and working in politics. A former college basketball player herself, Senator Shaheen pointed out how when Title IX was first introduced, only 7% of high school aged girls played sports. Today it is up to 40%, which shows how women have been able to play sports, but there is still work to be done. Shaheen drew a parallel between sports and government, as the United States Congress is a male dominated field. She noted that at the current rate it would take over 100 years for congress to have an even ratio of males to females. After answering a few questions from the audience, former Senator Kelly Ayotte took the stage as the moderator of the panel discussion.

The next part of the event was a panel style discussion between many influential women in New Hampshire.

First was Sarah Behn, the head women’s basketball coach at Brown University and the all-time leading scorer at Boston College. Next was Sandy Cleary, the CEO of SLC Group Holdings. Cleary is an award-winning entrepreneur and is responsible for founding CruCon Cruise Outlet, one of North America’s largest sellers of cruises. Also featured was McCall Gosselin, a Manchester native who worked her way up to be the VP of PR/Communications for Planet Fitness. Next to join the group was Alisha McDevitt, the news director at WMUR-TV. McDevitt has had a long and prosperous career covering politics in New Hampshire and she has been nominated for many New England Emmy Awards, winning one in 2008 for covering the presidential primary. Last but certainly not least was Dianne Mercier, the Senior VP and NH Market President for People’s United Bank. Mericier has been actively involved in many charitable organizations, such as the Boys and Girls Club of Manchester, and recognizes the importance of using your platform for good.

The women answered many questions from Senator Ayotte and certainly inspired many young women in the crowd. Their conversation focused on leadership, equity, and balance. They made sure to share personal stories and allowed the audience to take away many important lessons. The women spoke about the importance of getting involved, having confidence, and embracing what it means to be a woman in the workplace.

Overall, the night was full of great stories and empowerment for young women athletes across the state. The initiative taken by the women at Bishop Guertin High School is something they should be truly proud of.