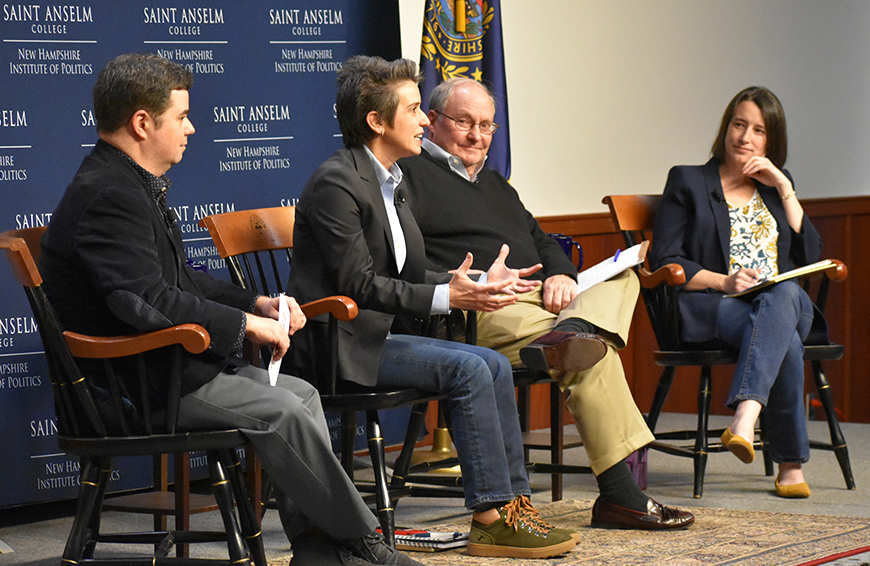 On February 5, Jennifer Lucas moderated a talk between Christopher Galdieri, Amy Walter, and Neil Newhouse in order to discuss the results of the Iowa Caucuses and what to expect going forward.

The event, which took place at the New Hampshire Institute of Politics, was entitled "Outlook 2020: Iowa, New Hampshire and Beyond." The panel explored the shortcomings of the Iowa Caucuses, what to expect during the New Hampshire Primary, and what is in store for the 2020 election.

Lucas began the event by asking the panel, “What do you think of this mess?” referring to the delayed reporting following the Iowa Caucuses.

Newhouse told the audience that at the beginning of the week, he thought the dominant story would be how the Des Moines Register failed to include Mayor Pete Buttigieg in a poll.

Walter commented that that error was just “the canary in the coalmine” and that the predominant fear in Iowa currently is that “this is our last caucus.” Walter explained how the changes made to the Iowa Caucuses were championed by the Sanders wing of the party and that these changes have “taken the air out of the slingshot process” which propels candidates to New Hampshire. She also noted that the New Hampshire primary becomes “a do or die” for Joe Biden who came in fourth place in Iowa.

Lucas asked the group what they thought of former New York Mayor Mike Bloomberg’s “billionaire strategy” of skipping the early states while blanketing the airwaves with television advertisements.

Galdieri responded that he was “skeptical of it” but it was interesting how Bloomberg was establishing himself as the “break glass in case of emergency candidate.”

When asked about Elizabeth Warren, Walter questioned aloud where does Warren win if not in New Hampshire. She argued that if Warren loses in New Hampshire and drops out, the race will become Sanders vs the moderates and that the convention, with its coalitions and processes, will be hard to explain to a casual follower of politics.

When asked about Amy Klobuchar, Walter said that on paper, a Klobuchar candidacy makes sense, but it is hard to inspire people with a practical message.

When asked by Lucas what to expect coming in the next few days and weeks, Walter said to pay attention to Sanders' margin of victory in New Hampshire while Galdieri said to watch for who is attacking who. Newhouse concluded by saying now, New Hampshire is at the top of the heap.