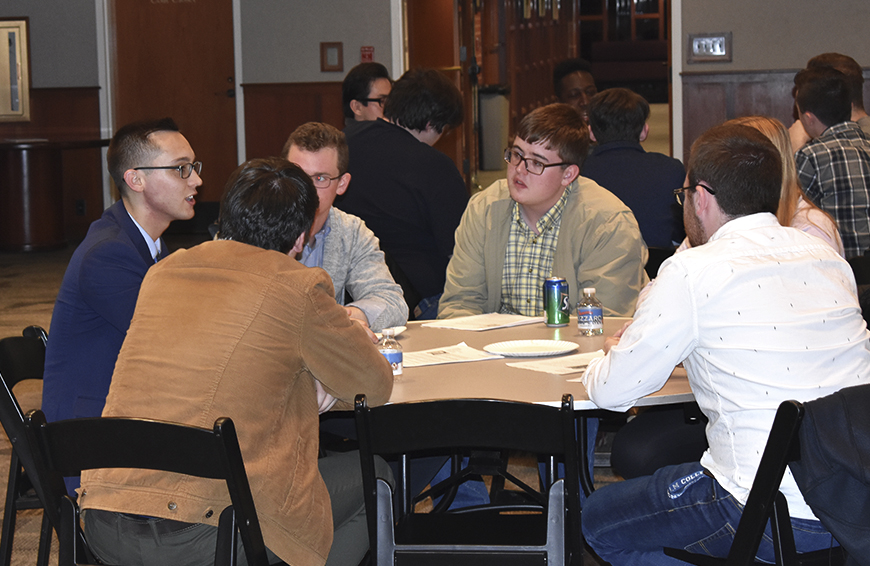 The New Hampshire of Institute of Politics (NHIOP) welcomed back six former students to Pizza & Politics this past Wednesday. The Pizza & Politics event allowed current students looking to become involved in the political world after college to connect with young Anselmian alumni.

The panel included two graduates from 2018, three from 2017, and one from 2016. The former students discussed how they landed their current jobs, as well as gave advice on how to be successful in the world of politics.

Brandon Pratt '18 currently serves as Special Assistant to Governor Chris Sununu, working closely with the Governor to plan out his intense schedule.

Clare Robbins '18 is in a similar position as Pratt. Robbins serves as the State Scheduler for New Hampshire Senator Jeanne Shaheen. She works busy hours to plan all of the scheduling and events for Senator Shaheen.

Donald Stokes '17 currently works in the Office of Mayor Joyce Craig as the Director of Community Engagement. His job involves assisting constituents with city issues that impact Manchester. He also works as the scheduler for Mayor Craig and works diligently to keep track of her calendar and the events she attends.

Ashley Motta '17 works as a Constituent Services Representative in the office of Congressman Chris Pappas. Her job consists of assisting residents of New Hampshire’s First District, including those with federally related issues and concerns regarding immigration, Social Security, and the IRS.

Joe Alexander '17 serves as a New Hampshire State Representative for Goffstown. Alexander also serves in the House Judiciary which considers all matters that are related to the judicial system. He fills a busy schedule by balancing two jobs while attending the Carsey School for Public Policy at the University of New Hampshire as a full-time graduate.

Brian O’Connor '16 currently attends the University of New Hampshire as a student looking to achieve a master’s in politics. His current research focuses on voter demographics, campaigns and elections, and the New Hampshire primary.

All of the former graduates had the similar advice to be persistent and never hesitate to put your name out there. They encouraged students to apply for an abundance of internships as well as become involved in as many political opportunities as they possibly can. After all, as Stokes pointed out, “Politics isn’t about what you know, it’s about who you know.”