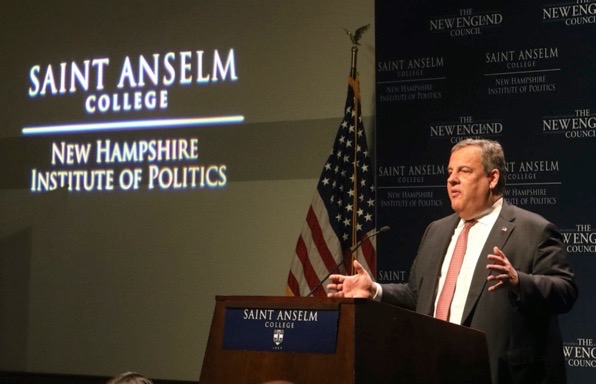 Former New Jersey Governor Chris Christie visited NHIOP for the first in-person ‘Politics and Eggs’ event since before the pandemic hit. A crowd of students, faculty, and many guests gathered on the morning of March 21 to share breakfast and discuss the latest political issues with Governor Christie.

Christie opened his speech with remarks about his work with ABC, reminiscing on the last time he visited NHIOP as an ABC commentator on February 7, 2020. Coincidentally, this was the last ‘Politics and Eggs’ event with Bernie Sanders before the nation went into quarantine. Governor Christie explained how unique the opportunity to be a Republican voice on ABC has been for him. “It continues to make me have to think about who we are and who we want to be,” he said.

During the event the audience was able to hear about various issues such as inflation, tensions with China, renewable energy and oil, and much more. In an audience with diverse political beliefs and interests, it was a valuable opportunity to engage in respectful discourse and learn more about the issues that matter in politics today from different perspectives.

When discussing the role that the US should take in the Russia and Ukraine conflict, he disagreed with those who believe that America should focus on America first. “Our responsibility is the price we pay for being prosperous and free,” he said. Christie emphasized the weight that American words and actions have in international conflict. “Words matter. Those words from people in our party who called Putin genius and savvy are being replayed on Russian television to prop up a dictator who is sending his soldiers to slaughter,” said Christie. He also expressed how the actions of President Biden were signals that could have encouraged Putin to take action. Christie explained how Biden withdrawing from Afghanistan signaled a fear of conflict that encouraged Putin to move and Biden’s decision to stop arming Ukraine in January 2021 also contributed to the conflict.

One of the prominent themes of Christie’s speech was Americans evaluating whether elected leaders were for “me” or for “us.” Christie has been outspoken about his opinions on former President Donald Trump, despite some members of the Republican party disagreeing with him. Governor Christie was one of the first mainstream Conservatives to endorse Trump, but openly criticized Trump for his reaction to the 2020 election and complacency during the events of January 6th. “I tried to call the President, but he didn’t pick up because he knew what I was going to say,” Christie said in regards to the Capitol riots in January. “You cannot sit in the White House and not go out to try to stop it, it’s just wrong,” said Christie as the audience erupted with applause.

When the subject turned to candidates for the 2024 elections Governor Christie did not give any hints about whether or not he intends to run for president. He speculated that Biden will announce that he is not running in mid-2023, citing his age and mental capability as contributing factors, and that Vice President Kamala Harris will likely run but not unopposed. Governor Christie called the 2024 election one of the most important races in the United States and in the world due to the immense power and influence that the US President has. “Look at the changes in the world between each administration,” said Christie. “We need to decide who we are as a party and who we are as a country. Our democracy has to be the inspiration for the world again.”