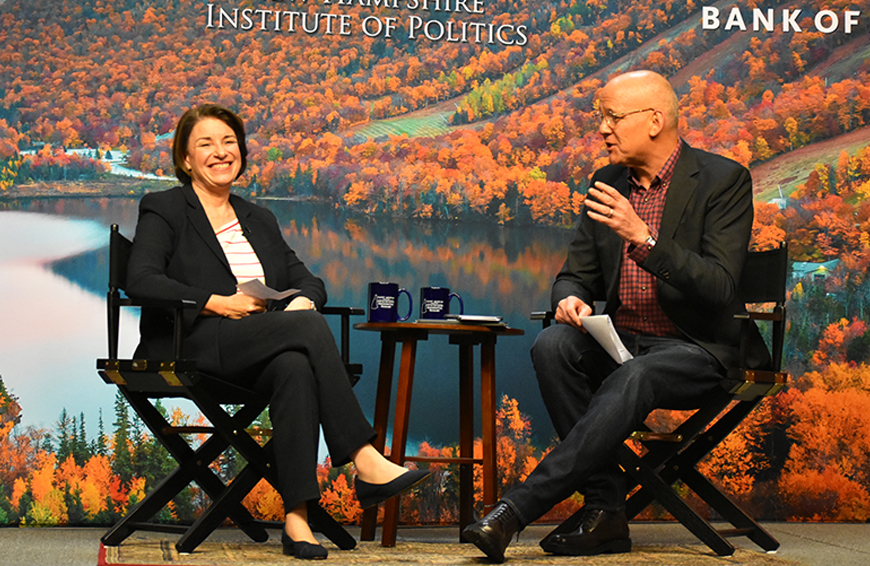 Senator Amy Klobuchar visited the New Hampshire Institute of Politics (NHIOP) on Friday, November 22 for "Politics Unplugged: 2020." Klobuchar has been Minnesota’s Senior Senator since 2009, having first been elected to the seat in the 2006 midterm elections. She currently sits on numerous Senate committees, including the Judiciary Committee and the Rules and Administration Committee, on which she is the ranking member. This was the Senator’s eighteenth visit to the Granite State on her campaign for the 2020 Democratic presidential nomination.

Klobuchar has a deep connection with the Land of 10,000 Lakes, as she is descended from an iron miner who immigrated to the United States in the early 1900s. Her father, journalist Jim Klobuchar, was a fixture of Minneapolis news in the 1950s and 1960s. During the Senator’s visit to the NHIOP, she emphasized her history as a bipartisan leader who used pragmatic politics to move legislation forward.

In the NHIOP auditorium, which was transformed into something that quite resembled a television soundstage for the Politics Unplugged event, one could notice many audience members holding new campaign merchandise in support of Klobuchar. The purpose of the event was simple: It was designed in a way for New Hampshire voters to “get to know” Amy Klobuchar. This event was part of a series of events designed with public policy and governance in mind.

The discussion revolved heavily around detailed policy specifics, as well as plans for how to get things done if Klobuchar were to take the White House. Politics Unplugged is sponsored by Bank of America and is a partnership of the NHIOP and Stay Work Play New Hampshire, a nonprofit organization with the mission to attract and maintain more young people in New Hampshire. Therefore, when the host, journalist John Heilemann, turned to the audience for questions, multiple were focused on youth issues. Climate change, college tuition, and youth voter turnout were among the issues audience members asked the Senator.

Klobuchar was asked about a number of key policy issues she cares deeply about. She gave touching anecdotes regarding her history with substance abuse treatment legislation as well as gun safety legislation.

Being a champion of bipartisanship in an increasingly hyper-partisan age is certainly a feat that the Klobuchar campaign hopes will attract New Hampshire voters. The candid talk was significant because it allowed the candidate to go in-depth on her vision for policymaking in the presidency. When soundbites are becoming shorter and shorter, the long-form communication of Politics Unplugged is certainly helpful for Klobuchar who takes pride in her detailed policy knowledge. We shall see if her focus on domestic issues that mean the most to New Hampshire voters, such as healthcare, transportation, and the opioid epidemic, will help her win the first-in-the-nation primary come February.