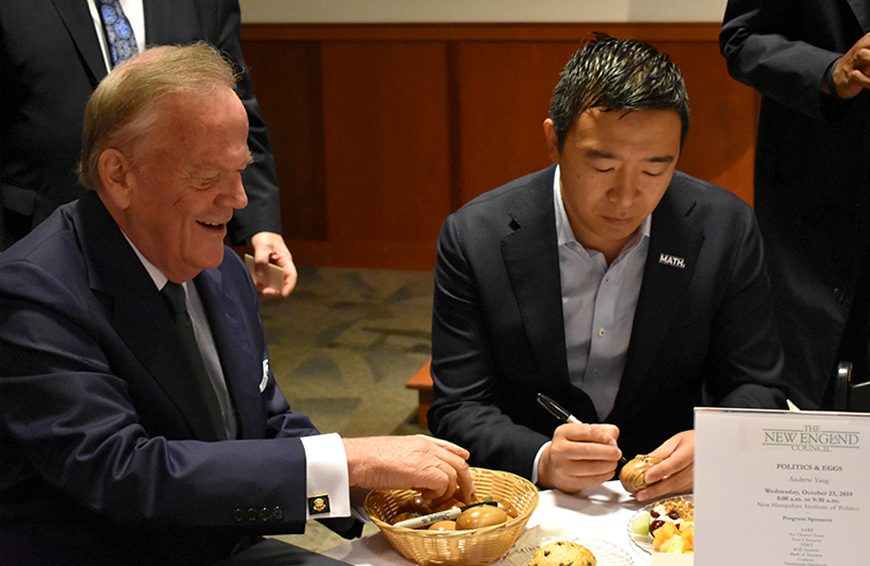 Yang is used to the cool falls in New Hampshire, however, because he attended Phillips Exeter Academy for high school. Post high school graduation, Yang attended Brown University and Columbia University. In 2012, former President Obama recognized him as a Champion of Change.

Right off the bat, Yang delivered a cool aura with his MATH pin. He later mentioned that MATH was an acronym for Make America Think Harder, which is what he advocates for while on his campaign. Yang made the joke that all entrepreneurs say that their business is always going great, even when it is not. He is no exception to this as he said, “My business was also doing great, until it failed.”

Much of Yang’s talk revolved around the fourth industrial revolution that he believes we are entering today. As technology rapidly grows and becomes more advanced, people will begin to lose their jobs to technology. One example he used was the American trucker, because trucking is the most common job in 29 states with it being predominantly middle-aged men. Yang mentioned that a tech company is 98% complete with a self-driving truck, which would lead to a large jump in unemployment. Another example he used was a call center and that with new technology, companies are able to make the bots sound just like people. This of course would also leads to job loss.

If elected, Yang plans on implementing the “Freedom Dividend.” This would allow every American over the age of 18 to receive $1,000 a month. Both Thomas Payne and Martin Luther King, Jr. created dividend plans for Americans but they were never enacted. He believes that if people were to receive the monthly dividend, money would likely return to the state and the economy through child care, student loans, rent, and major bills.

In America, there is only one state with a dividend, Alaska. Alaska gets the money from oil sales and returns it to the people through a dividend. Yang believes that it is possible for everyone in America to receive the dividend. However, instead of using money from oil, he plans on getting money from data sales. This is because data is now worth more than oil because of technology advances that rely on people’s data.

The Freedom Dividend would ultimately lead to a better America, according to Yang. He discussed how Gross Domestic Product (GPD) is no longer an accurate way to measure success. Yang believes that success should be measured by things like mental health, infrastructure, and climate change. Yang believes that the dividend is able to better America, especially in those aspects.

Yang was a notable speaker because he also discussed the importance of the early states, particularly New Hampshire’s impact on the upcoming election. He said that one New Hampshire voters is worth roughly 10,000 Californian voters. Yang concluded with the idea that New Hampshire can change history because democracy works the way that it should in New Hampshire.