Public Debate on U.S. Response to Invasion of Ukraine 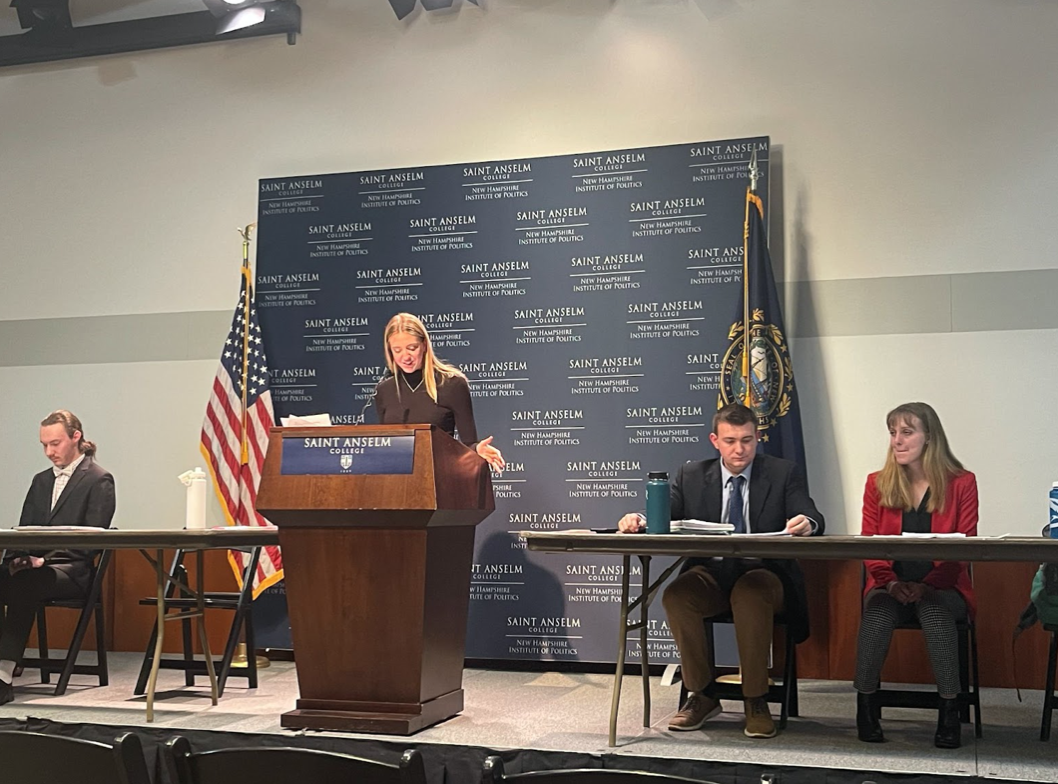 On Monday night, a public debate co-sponsored by the Kevin B. Harrington NHIOP Ambassadors and the college debate team took place in the NHIOP auditorium. Ultimately, both the affirmative and the negative sides support the people of Ukraine, with the debate focused on arguing which U.S. response to the invasion of Ukraine will yield the most success. Along with the night’s debate, advisor David Trumble announced that the event was a fundraiser in support of the Anselmian Aid for Ukraine program put together by Campus Ministry and other organizations on campus.

The debate began with debate team advisor David Trumble introducing the affirmative side: Sean Kelleher and Ailish Husband argued for more U.S. military support in Ukraine. On the negative side: Kathryn Monahan and Alexander Burgess argued for the U.S. to support Ukraine in non-military ways.

Kelleher started off the debate by introducing the affirmative claiming that the U.S. must display its power and strength through military action. By not supplying weapons, the U.S. is giving up the fight. Instead, the U.S. should assert that there is no longer a place for the authoritarian government through firm military action.

Following Kelleher, Monahan introduced the negative side by asserting that the best way to end the conflict between Russia and Ukraine quickly is through economic sanctions, legal measures, and the dissemination of information to the Russian people. Monahan highlighted the necessity of economic multilateral sanctions as they have proven to be successful in the past. “This war is Putin’s war,” said Monahan. Thus, she argued that the war must be treated as such. Broadcasting independent news to Russians will have a significant impact as the Russian people are more likely to convince Putin to end the war.

Subsequently, Husband, arguing for the affirmative, stated that economic sanctions will only hurt the Russian people. “Time is of the essence,” Husband stated, arguing that the U.S. cannot be blackmailed into complacency because of nuclear threats. In response to the non-military initiatives introduced by Monahan, Husband contended that economic sanctions, due to the trickle-down effect, will only hurt the Russian people as they threaten Russian sovereignty. Further, legal actions to ensure Russia pays reparations to Ukraine will not prove to be helpful as Russia will simply refuse to pay. Putin will continue to intervene with free radio as he does currently rendering that useless as well. Ultimately, the affirmative believes the only way to end the war quickly and effectively is through the use of military action.

Burgess initiated his advocacy for the negative stating that the U.S. should not “fight fire with fire.” Rather, a safer option is to punish Putin who is responsible. The U.S. cannot back down from Russian media censorship, as the Russian people “must see the monster Putin really is,” Burgess claimed. Reparations for destroyed homes, burnt-down hospitals, and ruined schools will allow Ukraine to take back what has been lost.

Kelleher culminated the affirmative’s defense of military action, expressing that the war between Russia and Ukraine does not call for a slow and steady approach as Ukrainians are dying. The best course of action, therefore, is to utilize military efforts. Monahan concluded the debate for the negative, underscoring that military action is a liability. Thus, economic sanctions, legal repercussions, and the spreading of information to Russian citizens.

Advisor David Trumble finished off the night, thanking both the debaters and the audience for their time. While the debate proved there is no definitive answer as to the best way to end the war between Russia and Ukraine, the debate served as a terrific reminder that now more than ever Ukraine needs the U.S.’s help.