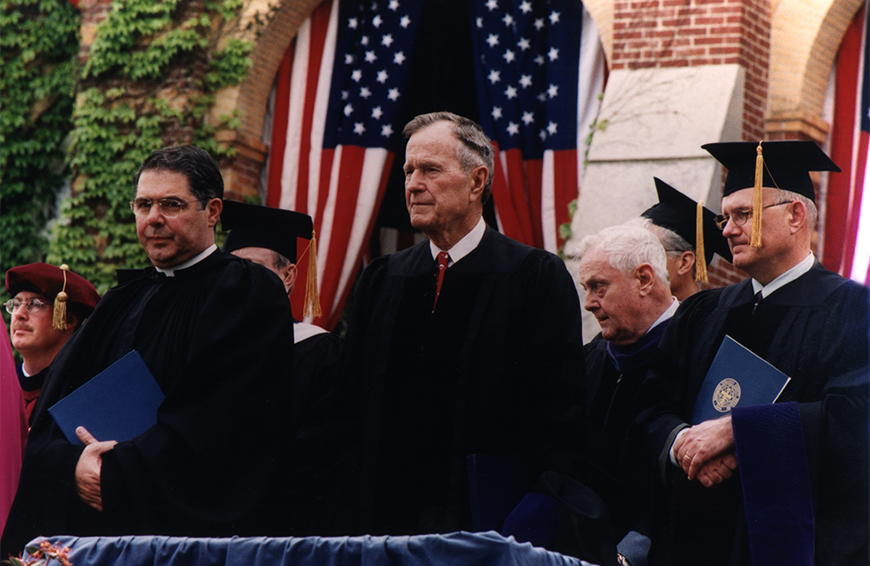 A president, vice president, Director of Central Intelligence, Republican National Committee Chairman, Ambassador to the United Nations, Congressman, and more, most of the greatness about former President George H.W. Bush was unrelated to politics.

When news broke over the weekend that President Bush had died at the age of 94, Americans everywhere remembered his leadership, humility, and patriotism from World War II to the presidency. They recalled his dedication to public service, love for his family, and devotion to his country.

Granite Staters shared many moments with the president over the years. President Bush spent a great deal of time in the first-in-the-nation primary state during his presidential campaigns in 1980, 1988, and 1992, and President Ronald Reagan’s reelection campaign in 1984.

President Bush was no stranger to Saint Anselm College. On May 18, 2000, he delivered the College’s commencement address where he was presented an honorary doctor of laws degree.

In remembrance of the late president, the community is invited to watch the live broadcast of his state funeral on Wednesday, December 5 in the New Hampshire Institute of Politics (NHIOP) auditorium. Services are scheduled to begin at 11 a.m. There will be items from the NHIOP archival collection on display from President Bush’s time on the campaign trail and in office.

Videos from the archives: