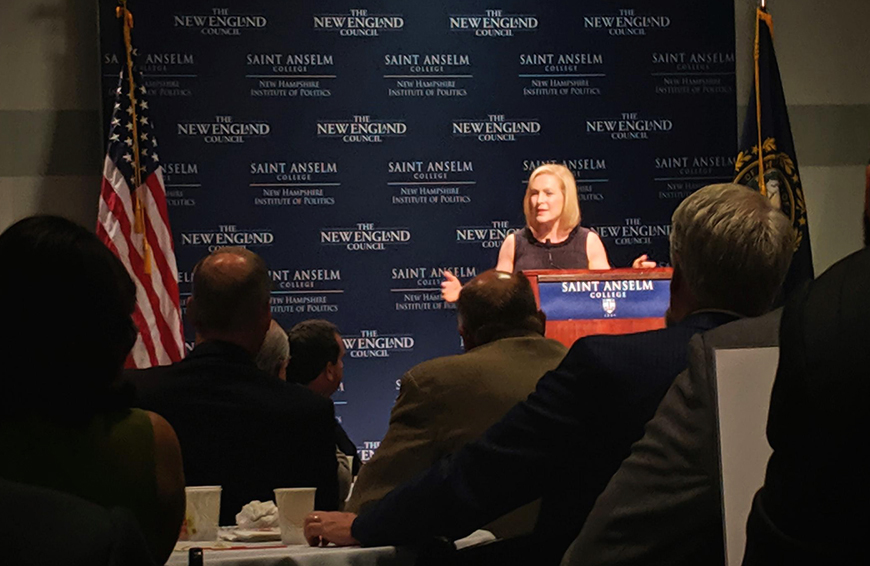 To start off Politics & Eggs, she stated that she “would sign every egg in the room before she left” to show the community that she is competitive and will finish any task at hand.

Going on to talk about her mother and grandmother, she spoke about how influential they have been in her life. Gillibrand’s mother, one of three women in her graduating law school class and her grandmother, someone who would always be part of the elections in Albany since she campaigned for different people. Gillibrand went on to state, “you couldn’t get elected in Albany without the blessing of my grandmother and her lady friends.”

Talking about the first bill that she passed about the first responders to September 11, 2001; she discussed the difficulty in finding people to agree with her stance and pass the bill. But because she didn’t give up or let the others who ignored the bill go, she was able to pass the bill anonymously. She then went on to state that she will “pass the bills that others won’t.”

Discussing Congress, she stated “I take on the greed and corruption in government that others won’t.” Referring to how she was the first presidential candidate to post all of her taxes online, she told the audience that New York Times stated that she was “a little touch of revolution.”

After talking about her background and what she has accomplished so far, Gillibrand went on to discuss health care, and the rights people should have who want a child but cannot adopt due to LGBT discrimination. She stated that if she were to get elected then she would make sure to let anyone who wants to adopt a baby have the chance and ability to do it.

To end her speech, she spoke about climate change and how she would make sure that the world would move towards a better environment. Referring to John F. Kennedy and the race to the moon, she stated that the “only way for us to better improve our environment is to make it a measure of our success and a measure of our innovation.”

When answering questions from the audience about drug prices, Gillibrand stated “that I would go back to the drug companies and guarantee that medicare patients have the lowest price for all drugs.” She then went on to say that she will take on the patent law and fix them so people do not have to pay more for drugs like insulin that have patents.

To end her speech, she said she would never give up on what she thinks is right and that she believes that she is the leader our country needs to make our country a better place, and better environment.