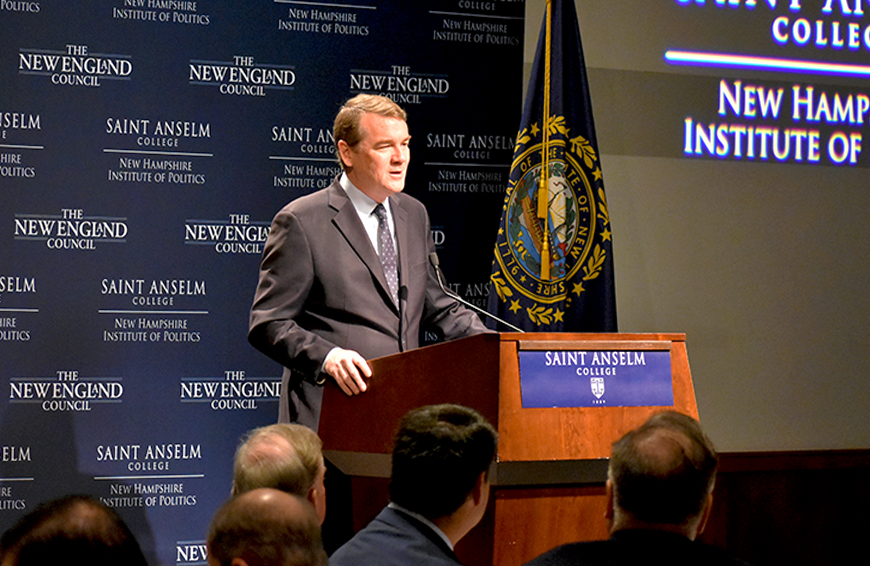 U.S Senator Michael Bennet (D-CO) visited the New Hampshire Institute of Politics (NHIOP) for Politics & Eggs on October 25 as he continues his campaign for the 2020 Democratic nomination.

Bennet greeted guests with pictures and conversation before he delivered a compelling speech about what his presidency would look like. He then took questions from the audience which consisted of members of the New England Council, as well as those from the Saint Anselm community.

Prior to his time in politics, Bennet went to Wesleyan University where he studied history and he then went on to Yale Law School. He began his political career in Colorado after a successful business venture, where he helped build one of the most successful movie theater chains in the United States. Bennet served as Chief of Staff for John Hickenlooper, who was Mayor of Denver at the time. Bennet moved on to become the superintendent of Denver Public Schools in 2005, which led him to be appointed to the Senate in 2009.

Bennet made it known from the beginning what his campaign revolved around: the truth. He began with a story about the conversations he had with his daughters before he announced that he would enter the race back in early May. His family pushed him to tell the truth no matter what happens, win or lose, and that has been his motivation over the past several months.

His speech was most passionate when he spoke about the current state of American politics, which is a state of concern in his eyes. Bennet noted how the worst decisions he’s made in his life were the ones that he made by himself, and that our government must have the same mentality by making decisions together, even if that means crossing party lines. Bennet made it clear that he wants to restore integrity in America, and he wants to create opportunities to help every citizen.

Coming from a background of dealing with the public-school system, Bennet made note that America must strengthen schools in order to break the cycle of poverty. He was very adamant about creating a better country for the next generation of Americans, and he aimed that passion towards climate change policy and combating growing medical issues in America.

Bennet also touched on his involvement as a member of the bipartisan Gang of Eight where he helped create immigration reform that passed in the Senate with a large majority of the vote. When asked a question regarding what he would do regarding the growing conflicts in the Middle East, he replied by saying he would do, “the opposite of Trump.”