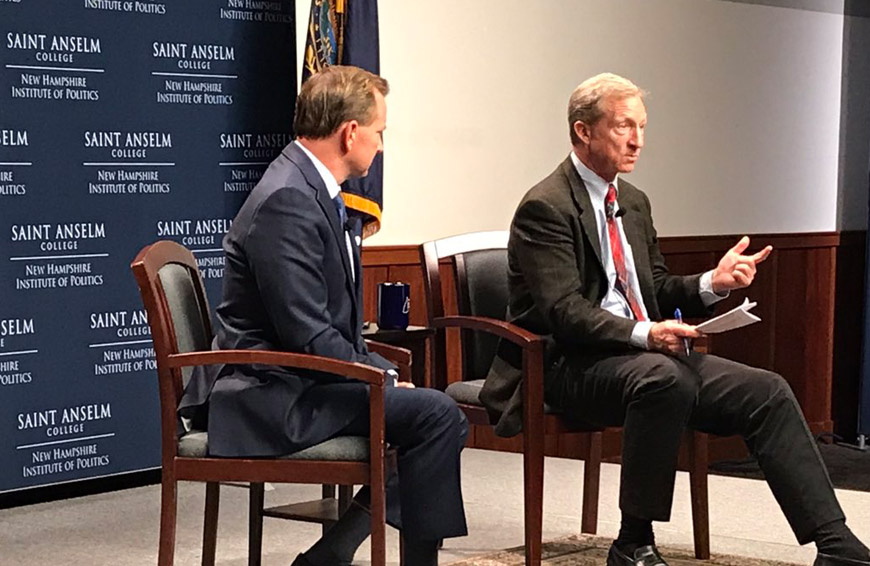 On April 16, the New Hampshire Institute of Politics (NHIOP) welcomed Tom Steyer to the Speaker Series for a sit-down discussion with former WMUR anchor, Josh McElveen, entitled “Corruption or Justice: American Democracy at a Crossroads.”

Mr. Steyer is the founder of Need to Impeach and Next Gen America. Both organizations are designed to mobilize the American population to participate in and take back democracy in the United States.

He sat down with McElveen for a dialogue and interaction with the audience in the NHIOP auditorium. The topic of discussion for the evening centered around Steyer’s advocacy for the impeachment of President Donald Trump.

Steyer believes that impeachment is a critical next step in the process of taking back the American democracy. Steyer expressed to McElveen that it was crucial that the American people once again trust their government.

He noted that Donald Trump’s presidency has been a polarizing, divisive point in the modern era which has led to a decline in public confidence about the government’s reliability. In his words, the only effective policy in United States politics “is telling the truth”— Steyer believes it is vital and necessary that those leading the country are upfront and honest, and therefore held accountable by the people they represent.

Steyer does not believe that Donald Trump lives up to this standard, having cited his public record as corrupt and listing what Steyer believes are various felonies committed by the president while in the White House, such as paying off women to keep quiet about his previous private encounters with them and accepting money from foreign governments in his ongoing real estate business.

Throughout the discussion, Steyer emphasized the need to take back the American democracy into the hands of the working people. He expressed his own belief that “[the American people] are in a crisis” and that it is no longer fair that the wealthy elite control the entire game. He believes wholeheartedly that the working people of the country are entitled to a fair say in what the government does and how their wealth is distributed.

Steyer would neither confirm nor deny a presidential bid when prompted by Josh McElveen. He did, however, note that he would do anything in his own power to “rebuild the whole country” and “take [democracy] back” into the hands of the people.

While answering questions from members of the Manchester community as well as Saint Anselm students, Steyer encouraged all involved to participate fully in democracy to the extent that they were able, strongly emphasizing the need to vote in the upcoming, pivotal presidential election.