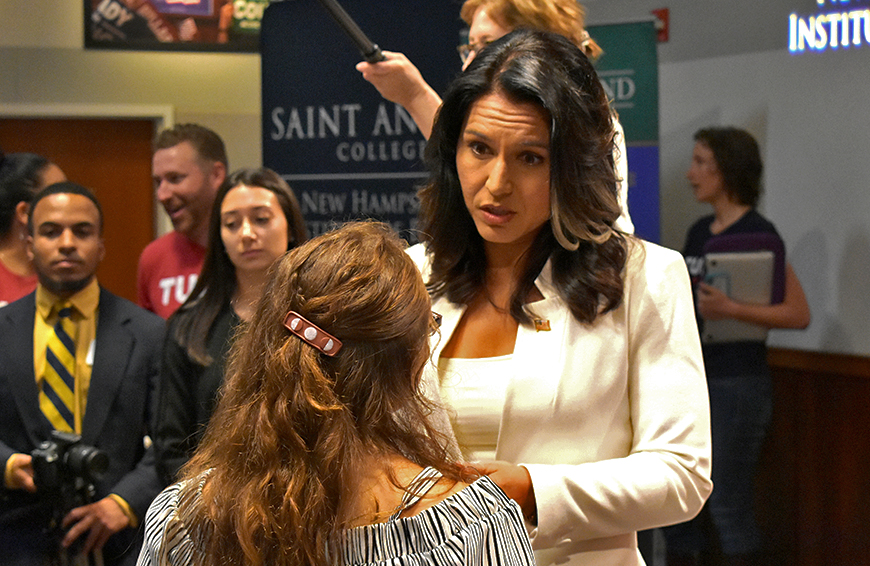 One theme of the morning was “Aloha,” which Gabbard explained not only means hello or goodbye, but also “I welcome you with respect.” She plans to implement this same value into the White House, if elected.

To begin, she would work to take out the hyper partisanship and hyper divisive politics from the leadership of the country. She said, unity starts with leadership but also needs to happen within communities. Putting partisanship aside, Americans should use their anger and frustration to drive them to bridge the divide between party lines. One solution is to first begin with relationships that start with respect.

Gabbard gave the example of when she was first elected to Congress in 2012. As a freshman representative, she helped bridge the gap between party lines through the universal love of food. She asked her mother to make close to 1,000 boxes of macadamia nut toffee for her congressional colleagues and their staff. In addition, she wrote handwritten notes to every one of her colleagues introducing herself and asking what issues they care about. These little pieces of “Aloha,” as Gabbard refers to, allowed her to pass the FIRST STEP Act, an important prison reform bill. This bill worked to reduce mass incarceration and lower recidivism by authorizing funding for educational programs and job training to formerly incarcerated individuals.

After being deployed in 2004, Gabbard said that the current administration is not fulfilling the essential mission of service. Still to this day, the representative serves as part of the Hawaii National Guard. In fact, she paused her campaign in early August for two weeks in order to join National Guard active duty training in Indonesia. There, she was reinforced by the principle of a problem-solving mindset, which she said was especially relevant to the challenges of the country in foreign and domestic policy.

With no current problem-solving mindset in place, she brought up key issues the country currently faces. The first being health care and Medicare’s inability to negotiate prescription drug prices. As president, she would solve this problem by reforming the patent system, import cheaper drugs from other countries, and end price gouging, focusing on accountability measures and oversight.

Gabbard also explained in detail how she would implement criminal justice reform and end the war on drugs. In 2017, she introduced the only bipartisan measure to end the federal prohibition of marijuana. Her experience in active duty has taught her that combat leads to both visible and invisible wounds. To fight the opioid epidemic, she highlighted the need for veterans to start using alternative drugs like medicinal marijuana to stop the cycle of addiction.

She also highlighted the need to end wasteful, counterproductive wars, noting Trump’s war on Iran. While on duty in 2005, she saw the high human cost of war in Baghdad. She said, the cost of failed foreign policy decisions in Washington “reaches farther than people in uniform, [and has a] direct impact on every one of the domestic impacts we face.”

She saw this first hand after serving on the Honolulu city council in 2011, where she dealt with issues such as fixing potholes and keeping local parks clean.

Gabbard’s experience as a service member is integral to her presidential campaign. In fact, her goal as president is to bring the principles of service over self to the White House. If elected, Gabbard will become the first Samoan American, Hindu, female combat veteran president of the United States.