The US Presidential Inauguration: A Quadrennial Celebration 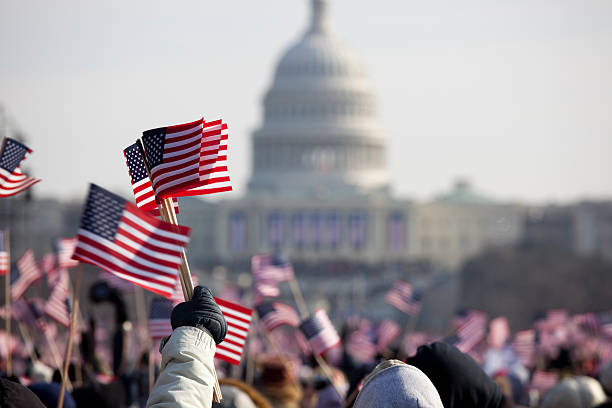 Since 1937, the swearing in ceremony for the newly elected President has taken place at 12pm EST on January 20th according to the 20th Amendment. However, most inauguration programs begin in the days leading up to the day of the ceremony. The inauguration of the President of the United States is one of the most important events in a president’s time in office.  The incoming president usually follows the decade’s long traditions of previous administrations in the events and formalities surrounding their own inauguration. The Presidential Inaugural Committee, a group determined by the President-Elect, plans all the events surrounding the ceremony, including the balls and parade. Whereas the Joint Committee on Inaugural Ceremonies, usually made up of a bipartisan group of leaders in the House and Senate, is in charge of planning the Swearing-In Ceremonies..

On Inauguration Day, the outgoing President meets with the President-elect early in the day prior to the ceremony for a discussion about the office. Following this meeting both groups leave the White House for the Capitol building, where the Swearing-In Ceremonies have taken place publicly for decades. Once all the dignitaries are welcomed to the stage by the master of ceremonies, an invocation is given by a member chosen by the President-elect and the Inaugural Committee. Following this the Vice President-Elect is sworn in by a member of the United States Supreme Court. A brief musical performance follows, and the President-Elect is sworn in by the Chief Justice of the Court. The new President then gives their Inaugural address outlining the goals of their presidency and a cry for the nation to come together. Another musical performance follows the address, and a benediction closes the ceremony.

The President and Vice President will then attend the Inaugural Luncheon with congressional leaders hosted at the Capitol, after which the Inaugural Parade makes it way from Capitol building down Pennsylvania Avenue ending outside of the White House. The President, alongside the first family, takes time to interact with constituents in the crowd as they walk the parade route, followed by many military groups (both active and retired) and dozens of marching bands of all ages, from professional adult groups to high school ensembles. A number of official Inaugural balls throughout the city and its suburbs are held alongside many unofficial balls and galas that members of the public and donors can attend during the night. The night is non-stop for the President, which is a good first day in what will likely be the most time consuming and difficult job they will ever hold.

Will Joe Biden’s inauguration follow in the footsteps of his predecessors, or will the President-elect dramatically change the inauguration ceremonies during these uncertain times?

A Look Back at the Last Three Presidential Inaugurations

Every President is different in the events that they hold outside of the swearing in ceremony. President Barack Obama’s 2009 inauguration was the most extravagant in the recent past as it followed the “A New Birth of Freedom” theme, a line taken from the Gettysburg Address to commemorate Abraham Lincoln’s 200th birthday. He held many events referencing Lincoln’s inauguration including a train ride from Philadelphia to D.C. on the 17th commemorating Lincoln’s historic ride from Illinois to the city which he did for his inauguration. There then was the “We Are One” concert held at the Lincoln Memorial on January 18th, which featured celebrities such as Josh Groban and Queen Latifah reading historic passages in Lincoln’s honor. January 19th was Martin Luther King Jr. Day and Obama deemed it a National Day of Service where he pushed members of the public to go out in their communities on King’s behalf. He followed the service with the “We Are the Future” kid’s concert where celebrities performed to honor military families across the nation. Unlike 2009, the theme of Barack Obama’s second inauguration was “Faith in America’s Future.” In keeping with this idea, another kid’s concert honoring military families, “Our Children. Our Future,” was held the night prior to the swearing in ceremony. President Obama focused on looking forward to the next generation of leaders.

President Obama’s 2009 inauguration also hosted more official inaugural balls than past presidents. A total of ten were held with different invitees in mind. The first stop was the Neighborhood Inaugural Ball which was the first to offer tickets at an affordable price for members of the public rather than the financially well off. Other balls included the Eastern, Mid-Atlantic, Midwestern, Southern, and Western balls which were held for specific residents in their regions. There were also two balls, one for each of the President and Vice President’s home state’s residents. For the second time in history, there was also the Commander in Chief ball which was held for military families from across the nation. Lastly, the committee held the Youth Ball, an event for ages 18-35.

In 2017, President Donald Trump’s inauguration theme was “Uniquely American.” The goal was to outline how important the peaceful transition of power truly was and how important this democratic system is to our society. Similarly, he held a few events outside the swearing in ceremony on January 20th. On January 17th, the Chairman’s Global Dinner, a black-tie dinner for the Trump Administration and their appointees, was held to formally introduce and meet with foreign diplomats. This was a new addition to the inaugural ceremonies likely added because President Trump did not have any governing experience prior to his election and foreign diplomats wanted a chance tt interact with the soon-to-be President. January 19th saw a public “Voices of the People'' concert at the Lincoln Memorial, similar to many of the concerts that President Obama held during his inaugurations. During this concert, the newly elected leaders attended a wreath laying ceremony at Arlington National Cemetery. That evening President Trump held the “Make America Great Again Welcome Celebration”, a concert for his supporters that would be attending the inauguration the next day. This was another new addition by the Trump Administration to the inauguration that hadn’t been seen in the past few decades.

Each president is different in the events that they hold outside of the swearing-in ceremony of their inauguration as we have seen with President Obama and President Trump. Joe Biden is likely going to shake up the events even more as his inauguration is taking place in the midst of a global pandemic that will severely limit crowds in Washington D.C. It is unclear whether he will even hold a parade or any inaugural balls at this time. He has decided though, that his theme will be “Our Determined Democracy: Forging a More Perfect Union,” a reference to the Preamble of the Constitution. How will Joe Biden’s inauguration differ from those of the past due to the unprecedented time in which he will be sworn in?