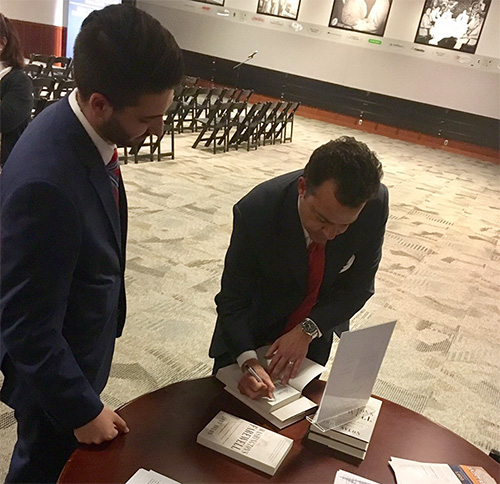 Avlon is the editor-in-chief and managing director of The Daily Beast and a CNN political analyst. He is the author of Independent Nation: How Centrists Can Change American Politics, and Wingnuts: How the Lunatic Fringe is Hijacking America, as well as an editor of the anthology Deadline Artists: America’s Greatest Newspaper Columns. Previously, he was a columnist and associate editor for The New York Sun and chief speechwriter for New York City Mayor Rudy Giuliani.

During his presentation, Avlon discussed President Washington’s farewell address, particularly what Washington had hoped to achieve in his message and how that message has been warped and lost over the course of American history.

According to Avlon, President Washington warned of three major issues that would plague the newfound republic if it continued down its course: partisan politics, a large national debt, and foreign intervention in American democracy. He then went into further detail about how President Washington’s message was misconstrued over the years, primarily by the isolationists in both World Wars.

Avlon touched upon President Washington’s great fear of foreign intervention in American democracy and the possibility of demagogues rising to power on the back of populism and hate mongering. He also discussed Washington’s efforts to unite the people of the thirteen colonies under the American banner, with moderation and compromise in politics and religion being essential to the American way of life.