A Weekend with CNN 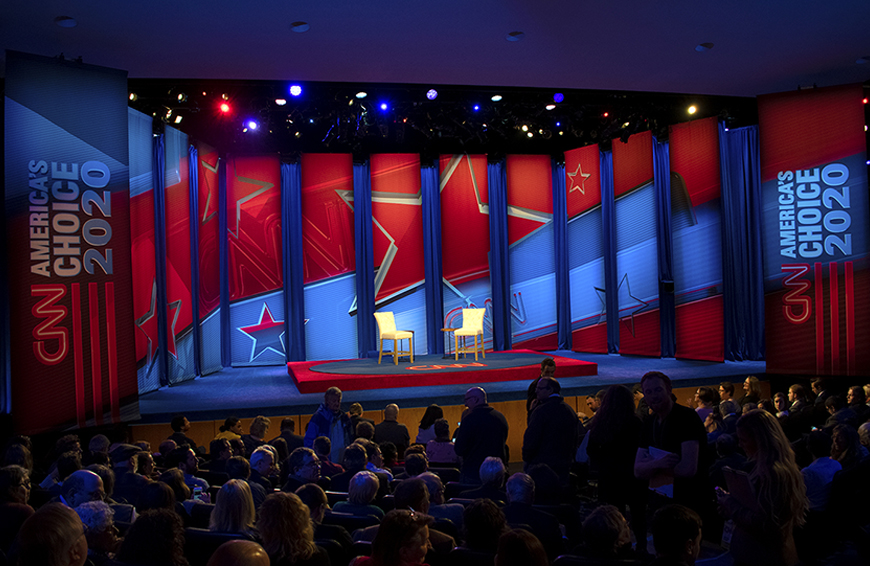 There are 622 days until the general election, but you would not guess that from the level of political activity that is happening on the Hilltop.

This past week, trucks started pulling up to the Dana Center to begin set up for a CNN town hall event with Minnesota Senator Amy Klobuchar on Monday, February 18. Some lucky Kevin B. Harrington Student Ambassadors had the opportunity to assist CNN throughout different stages of the production. I was fortunate to be one of them.

I arrived at the Dana Center on Sunday morning not knowing what my job would be for the next two days, but full of excitement. I assumed I would be helping to move around boxes or getting somebody coffee. Instead, I was greeted and offered a tour of the entire set as well as the production truck.

To see the Dana Center stage transformed into a CNN set was unbelievable. The place where I used to sit for lectures had become a stage that would be seen across the nation.

When I walked into the production truck I was overwhelmed. It looked like I had entered the control room of NASA, not a truck parked behind my dining hall. From the multiple TV screens to the many buttons (that were all too tempting to push), I was amazed at the setup that goes into such a production.

In the production truck, my fellow ambassadors and I also had the opportunity to speak with an engineer who explained the various wires and workings of the truck.

We went back into the auditorium after our tour and watched the setup of the stage continue. It was there that a producer came over to me, asked what my name was and told me that my new name was “Amy.”

I was Senator Amy Klobuchar’s stand in for the rest of the rehearsals. From then on CNN staff and my friends alike jokingly called me “Amy” or “Senator.”

That job entailed getting to act out the entire town hall as the Senator herself. Because my height is similar to the Senator’s, the CNN team was able to test out lighting and camera angles based on my movements. I did everything from walking out and waving to the imaginary crowd to answering fake questions asked by my peers.

Instead of questions about my plans for health care and climate change, my peers asked me questions about my favorite things and day-to-day life. The CNN staff as well as my peers got to know a lot about me over the two days, as we ran through rehearsals many times.

I also watched a few videos of Amy where I realized that she talks with her hands a lot and likes to cross her legs when she sits, so I attempted to mimic her in my movements.

By the end, I knew the director’s call to stage and my intro onto stage with the CNN background music.

On the day of the actual town hall, I got to practice with the real CNN moderator, Don Lemon. I even helped teach him how to say "Saint Anselm" correctly.

What amazed me over the two days was how seamlessly the CNN staff works and how I was treated as a peer. They took the time to explain to me why I had to look at certain cameras or why they were taping pieces of blue carpet in odd places (which turned out to be because of shadows). I learned a lot about lighting and the different degrees of change that the human eye can notice on a TV screen.

By the time the real town hall happened, it was funny to be sitting in the audience and not on stage acting as Senator Klobuchar. After the event aired, I got to introduce myself to the Senator, tell her what I had been doing for the past two days, and take a picture with her.

There is still over a year until the general election and just under a year until the primary election, but I am so grateful for the amazing time I had throughout this weekend with CNN and looking forward to many more opportunities to come.