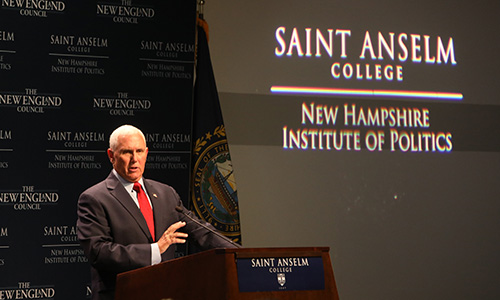 President of the United States Mike Pence for the Institute’s famous Politics and Eggs Series.

Listing a variety of challenges, from a global pandemic to conflicts around the globe, Pence said he was optimistic about the future. “I’ve seen the character of the people in this country. The American people always rise to the challenge,” he told the capacity crowd inside the New Hampshire Institute of Politics.

Pence kept his remarks focused on the future of the Republican party rather than his own political future.

“I truly do believe, now more than ever, that leaders in our party here in New Hampshire and all across America need to be focused on the challenges facing the American people today and offer positive, proven solutions for tomorrow,” he said.

Members of the audience then had their questions answered and eggs signed by Pence.
Pence’s visit was reported throughout the United States by media large and small. Here’s a snapshot of the coverage from his visit:

Politico: “Pence: 'I would consider' testifying to Jan. 6 committee

The Hill: “Pence says he would ‘consider’ invitation to testify before Jan. 6 panel”