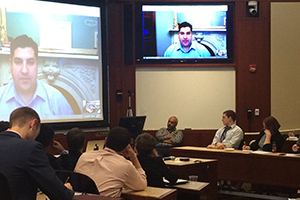 More than 50 students from 25 schools from across the country participate in the National Consortium at Harvard each year. The consortium was founded as a way to connect colleges and universities with similar civic engagement initiatives to share ideas and begin national conversations around the importance of political engagement, particularly among millennials.

During the conference, students heard from multiple speakers including Congressman Joseph Kennedy (D-MA), and Congresswoman Elise Stefanik (R-NY). They provided insights on how to encourage millennials to vote, how to simplify the voting process, and how to work across the aisle.

Motta and Tetreault each felt the conference was rewarding and encouraged them to think outside the box, especially when it comes to voter registration on campus.

"I learned a wide variety of strategies and tactics about how to better encourage students on campus to register to vote and take action on issues that affect college students by going out and voting," said Motta. "Because I heard from so many different perspectives, I feel better prepared to combat the challenges of getting students from all different majors and interest areas engaged in politics, and have many new practical ideas about how to get more students registered."

Students participated in a focus group with John Della Volpe, Director of Polling at Harvard's Institute of Politics. They had the opportunity to discuss why they are interested in politics and how they became involved. They also spoke about their frustrations with the current two-party system and feelings that much of politics today is largely ineffective, and covered the characteristics they look for in presidential candidates.

In addition, conference attendees heard from Teresa Vilmain, a national campaign manager, organizer, and political consultant, on how to organize a successful voter registration drive. She discussed successful techniques for voter registration organization and mobilization, and then students broke out into small groups for discussion.

During the final session, students heard from Mike Burns, National Director for the Campus Vote Project; Sam Novey, Director of Voter Contact Innovation at the Foundation for Civic Leadership; and Vashti Selix, Former Vote Oregon Field Director for the Oregon Student Association. They discussed successful models for campus voter registration, and advised students on the importance of following state voter registration guidelines and creative ways to inspire fellow peers to register to vote.

Tetreault summed up his experience by saying: "Being surrounded by such great talent and different experiences all around was amazing. I feel like I've learned so much about how to get people out to vote and why it's important. I'm just passionate to get started on campus."