History, Art, and Politics Unite During NHIOP Event about Selma and its Aftermath 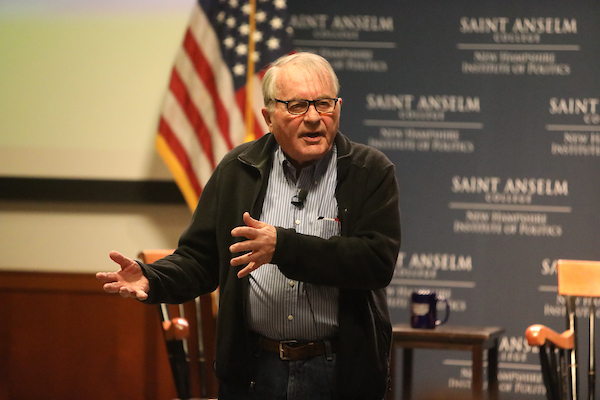 On Tues., March 10, history, art, and politics united at the New Hampshire Institute of Politics (NHIOP) at Saint Anselm College. William (Bill) Monnie, a civil rights worker during the 1960’s and the author of “Selma and Its Aftermath: A Photographic Journey,” shared music, photography, and significant moments of the past with a full audience. College students, faculty, staff, and community members also heard from musicians Julia Doucet ’20 and Professor Molly Lozeau as well as history professor Andrew Moore, and fine arts professor Elsa Voelcker.

The event was held with the college’s Center for Intercultural Learning and Inclusion as well as the Departments of History and Fine Arts and was the final in a series of events paying tribute to Martin Luther King, Jr., this year.

“It was a wonderful collaboration,” said Ann Camann, deputy director of the NHIOP. “I am grateful to the faculty members for their time and interest in partnering on this event.”

Camann explained that the idea for an interdisciplinary program grew out of the event title, “Selma and Its Aftermath: A Photographic Journey.” She said it was a natural fit to partner with the Departments of Fine Arts and History given the photography aspect of Monnie’s story, Voelker’s expertise in photography, Lozeau’s spring semester music course, and History Professor Andrew Moore’s research and interests.

“Black History is celebrated every February, but the Black community’s impact on America goes way beyond just one month. It should be celebrated every month,” said Wayne Currie, director of the Center for Intercultural Learning and Inclusion.

Monnie’s publication chronicles his work during the 1960s, giving readers a close account of Martin Luther King's march from Selma to Montgomery in 1965. Monnie photographed and participated in all the events described in “Selma” and offers a personalized perspective of the times. He pays particular attention to the many ‘ground-up’ people who made significant contributions to advancing civil rights honoring the courageous citizens who changed history through their brave actions.

During his presentation, the former civil rights worker showed slides of pictures he had taken during the march, sharing his story as he looked at each image.

“Though his images were from small color slides, they give one a sense of what it was like on the ground at this march,” says Professor Voelcker. “Monnie supplied many small details that made one really experience the difficulty of the march.”

Monnie shared that the first night they camped on a large field, guards surrounded the tents facing in as if the marchers were the threat. When this was pointed out, the next day and the rest of the nights, the guards then turned around to actually watch for intruders.

Additional details included that the group initially had 3,200 marchers but once they were marching on a two-lane road, they were asked to reduce to just 300.

First-year student Madilynn Ressler attended the event as part of her spring semester course, “America: Origins to World Power.” The international business and marketing double major says she really enjoyed hearing from Monnie. “I was impacted when Bill Monnie was showing the pictures he took along his journey, specifically when he went in depth about joining Dr. Martin Luther King Jr's conference,” says Ressler. “I was intrigued to hear about the experiences that he lived through.”

Following Monnie’s presentation, Professors Moore and Voelcker discussed with him the impact of the work, asking questions about the color of the film, the experiences he was recording, and his images of Dr. King and other leaders.

The event highlighted the need to approach a topic such as civil rights through an interdisciplinary lens, allowing participants to experience both the visual and auditory impact of the past. Doucet ’21, a soprano, performed “Over My Head (I Hear Freedom in the Air),” an African American spiritual selection arranged by Bernice Johnson Reagon, accompanied by Professor Lozeau on guitar to open the event. Lozeau explained that the musical selections featured were part of her current spring semester course, American Music and Social Change.

“Some of the curriculum we examine are freedom songs and music that impacted the Civil Rights Movement. I chose these two songs because both were impactful and are still sung today,” says Lozeau.

“Over My Head" has a long history. Lozeau explains that it has been around since before the Civil War and has many different iterations of verses, but during the Civil Rights movement in the 1960s the words were changed to emphasize freedom and peace. The event ended with "We Shall Overcome," which Lozeau says has become the unofficial anthem of African American's struggle for equal rights, sung and quoted in the 1960s and also in recent years during the Black Lives Matter movement. She sang and played guitar in the front leading others in a “singalong.”

“I believe it was an effective and impactful way to end the presentation,” says Lozeau.