On Tuesday, April 5, the New Hampshire Institute of Politics (NHIOP) hosted a panel discussion with political journalists Leah Askarinam of “The New York Times,” along with Sarah Frostenson and Nathaniel Rakich of “FiveThirtyEight.” The panelists joined the Institute’s Executive Director Neil Levesque for a lively discussion on each of their outlooks of the 2022 midterm elections. 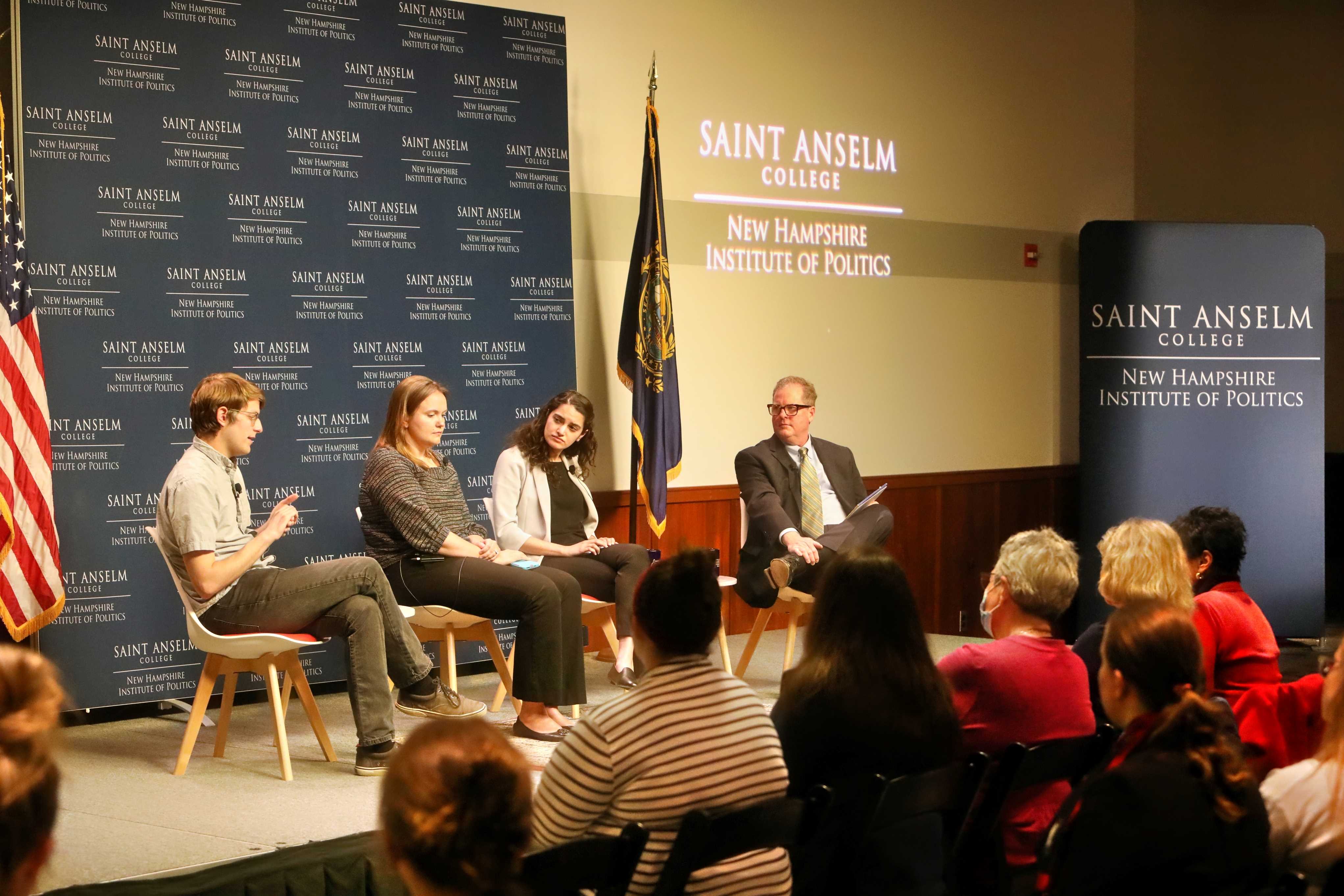 “It was great to be able to hear perspectives from professionals in the fields of polling and political journalism. They each gave great information and gave a clearer picture of where the midterms stand, as of now, for November,” says Olivia Boudreau, a junior communication major who attended the event.

To start off the discussion, Levesque asked the panelists for their overall predictions for the 2022 midterm elections. According to Frostenson, the bias towards the GOP and the house is predicted to be the lowest it has been in a decade. She also brought up the point that President Trump’s endorsements for this election were “earlier and bolder,” but then he eventually slowed down and even took some endorsements back. Endorsements such as these could really matter in states such as Missouri, Ohio, and Pennsylvania where Trump has yet to take a side.

From this discussion on the former Republican president, Levesque then posed the question to the candidates on the possibility of Trump running again in 2024 and how much of an influence big political figures such as Trump’s endorsements have on the success of a candidate running in the midterms.

“When he endorses, he creates a floor for these candidates,” said Askarinam. “The Trump endorsement is kind of the minimum to be credible, but we don’t know if it gets you over that hump to actually win.”

Frostenson used the term “Petty Primary” to describe the strategy behind Trump’s endorsements for this midterm season, meaning that Trump is seemingly going after his challengers to take on incumbents just so he can get back at those who have wronged him in some way. However, not all of Trump’s endorsements mirror exactly the actions of him, such as Glen Youngkin, the current governor of Virginia, or even New Hampshire’s own governor Chris Sununu, both of whom Askarinam believes to have a similar play book by being less outspoken about their support of Trump.

The discussion then moved to what the panelists think the winning issues are for a candidate in the midterm elections, with topics coming up such as Roe vs. Wade, rising inflation rates, and the importance of gerrymandering. One important point raised by Rakich was that while gerrymandering has created an evenly balanced house map, that doesn’t necessarily mean the maps are fair.

“It looks like now the bias in the house is going to be about one point toward Republicans, which is about as close to a fair amount as we’ve had in several decades,” said Rakich. “This is because a lot of competitive seats have been drawn out of existence due to both partisan and racial gerrymandering.”

Finally, the panelists took questions from the audience, with questions including their thoughts on Biden’s low approval rating, the possibility of Republican women in the next election, and advice for aspiring journalists.

“Do not be discouraged,” said Askarinam. “I think everybody who has been in journalism has been told you can’t do this at least once or twice.”

It is not every day that students get to talk to such well-renowned journalists, and events like these are a great example of the kinds of unique opportunities Saint Anselm students are afforded at the Institute.

“It is invaluable to have three young “New York Times” journalists describe their work and paths of success to Saint Anselm students and the community,” said Levesque.