The social and psychological dynamics of the 2016 United States Presidential election were dissected by professors of politics, psychology and sociology in a conference at Saint Anselm College. From Texas, Utah, Florida, Minnesota and many states closer to New Hampshire, 60 academic professionals from 26 colleges and universities heard from 48 speakers on March 18th at the "American Election Academic Symposium."

Presentations at the conference focused on why candidates acted as they did, why people voted as they did, and how people and candidates' behaviors will subsequently change. From Saint Anselm College, psychology professors Elizabeth Ossoff and Elizabeth Rickenbach spoke on "The Role of Age and Gender in the 2016 Election." Ossoff says the symposium was a great venue to explore the causes, consequences and changes connected with the "extraordinary presidential election."

"Our work looking at the intersectionality of age and gender addressed two issues rarely dissected by the pundits," Professor Ossoff explains, "and revealed patterns of voting that have implications for the future, given our aging population. The factors of cohort, age and gender will need to be closely considered in the future, along with race, education and socioeconomic status."

Topics from other presenters included: "How Twitter Dominated the Election," "Conspiracy Theories," and "What On-Line Political Humor Taught Us in 2016," and "Politics and Fear."

"Discussion was spirited at this symposium," says Christopher Galdieri, assistant professor in the Department of Politics at Saint Anselm College. "And consistent with the use of Twitter in the campaign, participants tweeted throughout the symposium, with a short sampling demonstrating the very themes highlighted by the day of analysis."

Among comments posted on Twitter during the conference were, "How to duplicate the passion without the abrasiveness?"; "[This explains] the role of anxiety in politics"; "Are elite endorsements still useful in primaries?"; and "...political humor...mostly depicts characteristics not issues."

Faculty from the politics, sociology, and English departments served the symposium as discussion moderators while symposium attendees were served by a Hospitality Crew of students from the Kevin B. Harrington Ambassadors Program of the New Hampshire Institute of Politics.

Keynote speaker of the event was Bethany Albertson (pictured above), a political scientist from the Department of Government at the University of Texas-Austin. Albertson studies political attitutes and persuasion and the role of anxiety in attitudes towards immigration. The 2016 "American Election Academic Symposium" was the third such conference at Saint Anselm College in four years.

To learn more, read the article, "The Twitter Age of the Presidency" by Pacific Standard Magazine. 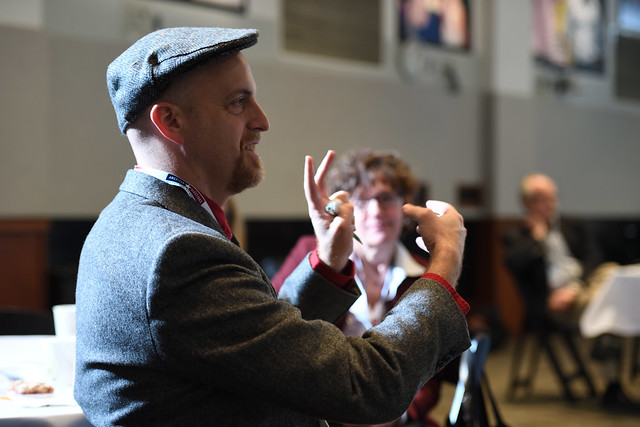