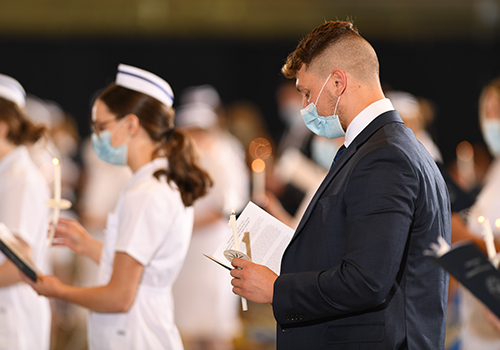 On Saturday, May 15, 2021, 93 members of the nursing class of 2021 received their Saint Anselm College nurse’s pin at the pinning ceremony in Sullivan Arena. The annual event celebrates the graduates as they enter the nursing profession.

The annual event was held in the Sullivan Arena and, like commencement, the nursing students had the opportunity to invite two guests to the ceremony.

The event began with remarks from Maureen O’Reilly, Ph.D., RN, executive director of the nursing department, followed by a welcome address from College President Joseph A. Favazza, Ph.D.

Student speaker Jordan Bergeron of Goffstown, N.H., addressed her class, encouraging them to look behind, look ahead, and look around as they prepare to enter the field of nursing. “Today we receive a pin that carries with it all the love that has brought us here, all the love that surrounds us currently, and all the love that will be,” said Bergeron.

“Slowly, without realizing it, you have over these short four years become an Anselmian nurse. So, as you look behind you, as you look ahead, don't forget to look around. We have been blessed with the unique opportunity to love other human beings in their most vulnerable state; to bring light and comfort to others in their worst moments.”

So, go and love. Go and serve. Take what you have learned, take all that you have become, and use it to bring goodness into this world.”

Blessing of the Pins

Dressed in traditional white, as student nurses at Saint Anselm have since the ceremony began in 1860, the students lined up to proudly accept their pins. Blessed by Father Stephen Lawson, O.S.B., they were presented to each graduating senior by several nursing faculty: Professors Joann Condon, Alicia Law, Carrie MacLeod, and Joanna Parolin.

The design of the pin features a shield, including elements of the official seal of the college and the symbol of the lamp, a reference to Psalm 119:105: “Your word is a lamp of my steps and a light for my path.” The pin symbolizes the nurses’ preparedness to serve as compassionate caregivers, and represents their accomplishment in completing such a challenging program. The inscription, Initium Sapientiae Timor Domini, means "The fear of the Lord is the beginning of wisdom."

Jordan Bergeron ’21 and Eleni Rizos ’21 were recognized with the Dr. Joanne K. Farley Award for exemplifying the spirit of Dr. Farley who was a 31-year member of the college community. Dr. Farley represented the true nursing spirit of caring, leadership, and selfless service on the local, state, and national levels.

Jenna Morrison ’21 and Molly Weaver ’21, were awarded the Student Nurse Leader Award in memory of Dr. Joyce Clifford, which recognizes a student who embodies Dr. Joyce Clifford’s qualities: a compassionate, dedicated, visionary leader in the nursing profession. Dr. Clifford was a trustee of the college, one of the first graduates of the nursing program, and a longtime supporter of the nursing program at Saint Anselm. She was inducted into the Fellowship of the American Academy of Nursing (FAAN), the highest honor in nursing. Dr. Clifford developed the Primary Nursing Approach at Beth Israel Deaconess Medical Center in Boston in the 1980s, in which nurses were assigned primary responsibility for four or five patients — caring for each while on duty, being on call when off duty, and acting as an advocate and intermediary with each patient’s doctors.

Finally, Emily Gaumond was presented the Dr. Mary Bruton Nursing Leadership Award, given to a student who embodies the former nursing leader. Dr. Bruton was the former director of the nursing program and associate dean of the college. Gaumond was recognized for her academic achievement, clinical competence, and potential for assuming a leadership role in the profession.

The ceremony concluded as student nurses took the Nightingale Pledge, an oath to honor and respect their patients and profession.

The commencement for the Class of 2021 followed at 11 a.m. on the college quad.