On Saturday, April 27, 69 senior nursing majors received their Saint Anselm College nurse's pin at the annual pinning ceremony in the Abbey Church. Family, friends, faculty, staff, and students were in attendance to celebrate the nursing class of 2019’s academic journey, and to wish the soon-to-be graduates well as they prepare to enter the world of professional nursing.

The event began with remarks from Maureen O’Reilly, Ph.D., RN, executive director of the nursing department, followed by a welcome address from Steven R. DiSalvo, Ph.D., president of the college.

Student speaker Mollie Mannion ’19 of Dorchester, Mass., addressed her class, comparing their four years to a literary journey: “For the true beauty of books are the pages that might be a little crumpled and maybe even have some tears from laughing too hard (or crying), the characters you meet who touch your heart, and the varying lessons in each chapter.”

“I am sure there may have been a few paper cuts along the way, but I am here to remind you that you should be proud,” she said, emphasizing the program’s academic rigor, but noting the importance of looking beyond one’s lecture notes to connect with patients with love and empathy.

Mannion is President of the Irish Society, a former campus minister, and an Anselmian 360 leader. She is currently completing her preceptorship in Catholic Medical Center’s Medical Surgery Department. 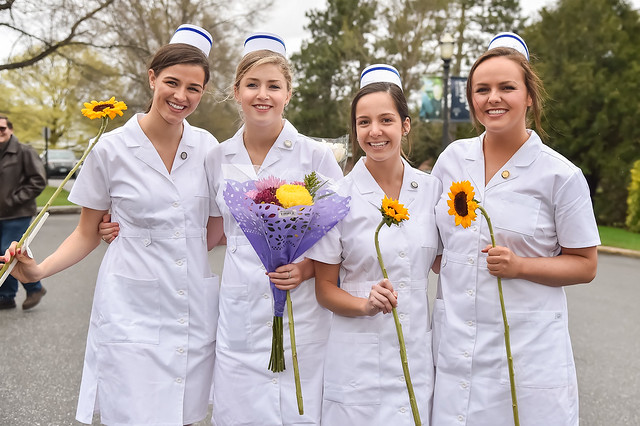 Blessing of the Pins
Dressed in traditional white, as student nurses at Saint Anselm have since the ceremony began in 1860, the students lined up to proudly accept their pins. Blessed by Father Stephen Lawson, O.S.B., they were presented to each graduating senior by O’Reilly and several nursing faculty: professors Carrie MacLeod, Joanna Parolin, Joann Condon, and Alicia Law.

The design of the pin features a shield, including elements of the official seal of the college and the symbol of the lamp, a reference to Psalm 119:105: “Your word is a lamp of my steps and a light for my path.” The pin symbolizes the nurses’ preparedness to serve as compassionate caregivers, and represents their accomplishment in completing such a challenging program. The inscription, Initium Sapientiae Timor Domini, means "The fear of the Lord is the beginning of wisdom."

Presentation of Awards
Cassidy Diaz ’19 and Cecilia Mercadante ’19 were recognized with the Dr. Joanne K. Farley Award, and Francesca Sciacca ’19, was awarded the Student Nurse Leader Award in memory of Dr. Joyce Clifford.

The Dr. Joanne K. Farley Award honors Dr. Joanne K Farley, a 31-year member of the Saint Anselm College community. Dr. Farley represented the true nursing spirit of caring, leadership, and selfless service on the local, state, and national levels. According to O'Reilly, who presented the honor, Diaz and Mercadante exemplify the spirit of Farley and represent the purpose of the award.

The Student Nurse Leader Award in memory of Dr. Joyce Clifford recognizes a student who embodies the qualities of Dr. Joyce Clifford, a compassionate, dedicated, visionary leader in the nursing profession. Dr. Clifford was a trustee of the college, one of the first graduates of the nursing program, and a longtime supporter of the nursing program at Saint Anselm. She was inducted into the Fellowship of the American Academy of Nursing (FAAN), the highest honor in nursing. Dr. Clifford developed the Primary Nursing Approach at Beth Israel Deaconess Medical Center in Boston in the 1980s, in which nurses were assigned primary responsibility for four or five patients — caring for each while on duty, being on call when off duty, and acting as an advocate and intermediary with each patient’s doctors.

The ceremony concluded as student nurses took the Nightingale Pledge, an oath to honor and respect their patients and profession. Following the ceremony, Father Stephen Lawson, O.S.B. celebrated Mass.