Opinion: What Dostoevsky has to teach us about American politics 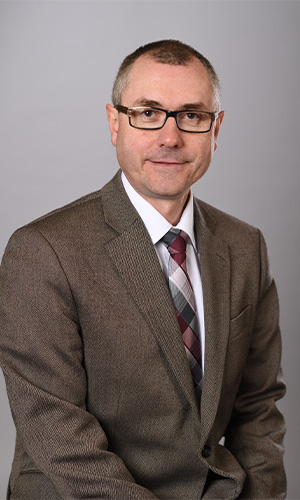 This spring, Politics Professor Erik Cleven co-taught Political Thought in the Work of Dostoevsky with colleague Professor Peter Josephson. In this op-ed, Cleven explains what he believes the American people can learn from writers such as Russian author Fyodor Dostoevsky.

Originally published by the Concord Monitor on 5/11/2022.

Many people are frustrated with the state of American politics today. There is a high level of political polarization and many say our system is broken. People are afraid to talk about politics with their friends and neighbors, or even close family members. Some even fear for democracy itself.

This semester I have been team teaching a course called “Political Thought in the Work of Dostoevsky” with my colleague, Professor Peter Josephson, at Saint Anselm College. That experience has convinced me that we have something unique to learn about American politics from great writers like Dostoevsky. Let me explain why.

Dostoevsky is often regarded as having foreseen the negative consequences of the 19th century ideologies of nihilism and socialism as these played out in the Russian revolution and the history of the Soviet Union. But he did not write treatises that offered theoretical arguments describing his political ideas. Instead, his novels tell stories that show what happens to characters who adopt and live out particular ideas, and the implications of these ideas for lived life. These stories teach us something about our own lived lives too.

In Crime and Punishment, the main character Raskolnikov imagines himself a ‘great man’ like Napoleon who can dictate his own moral rules. He kills an old pawnbroker and justifies his murder by arguing that she is hoarding resources that could be put to better use by helping far more people. In the course of the novel we see how his conscience torments him and refuses to comply with his own theoretical ideas. In the end, Raskolnikov’s acceptance of suffering and the love of others helps him overcome his ego.

The novel Devils follows the members of a small revolutionary group in provincial Russia. Many of them have rejected traditional norms of society and believe that a new person and a new society can be created if they, the few enlightened ones, impose their will on the masses. As the action unfolds egoism and fear lead them to self-destruction and the destruction of others.

The Brothers Karamazov is perhaps the book where Dostoevsky gives the clearest articulation to his own alternative to these political ideas. One of the characters in the novel, Father Zosima, a Russian monk, teaches the way of active love. He teaches that evil can be overcome by it. Father Zosima says that we must avoid lies, including lies to ourselves, contempt, and fear. Why avoid these three things? Because they stand in the way of active love, and as the other novels show they lead to destructive consequences.

With this lens we can see that contempt drives the actions of both Raskolnikov in Crime and Punishment and the nihilists in Devils, and that attitudes towards others matter as much as the ideas that they might be holding. Contempt allows political actors to see their own freedom as higher than the freedom of others because they think only they see the truth.

It allows them to regard people as expendable means to an end, and to dehumanize them as legitimate targets of politically motivated violence. Active love, on the other hand, requires humility and sacrifice for others, and through it we pursue not just self-interest but the interest of others.

This is what Dostoevsky has to teach us about American politics today. The biggest problem in American politics is not that some people want big government and some want small government, or that some advocate for abortion rights and others for gun rights. The biggest problem is that our politics is often driven by contempt, contempt for those who think differently than we do.

I have heard liberals and progressives say that people in red states are at best stupid and at worst just plain evil. Similarly, I have heard conservatives say that liberals are traitors who are destroying the country. These views are often accompanied by feelings of superiority and contempt.

I do not say this because I stand above these feelings. I know all too well the temptation to react to political expressions with contempt. But, I also know I want to overcome these feelings and I know many Americans who bemoan the state of political polarization in our country and long for civil discourse with their neighbors. Perhaps Dostoevsky gives us a path forward.

Perhaps our first test of any political communication whether it is on social media, in the press, or in person should be whether it is an expression of contempt. It isn’t liberal or conservative policies that are incompatible with democracy, but dehumanizing contempt.
American democracy depends on differing viewpoints. Without them, it is just autocracy. Similarly, New England’s political traditions are rooted in the idea that we all have something to learn from listening to our neighbors. Why else hold a town hall meeting? These traditions require humility and are eroded by contempt.

This does not mean that we cannot be angry at injustice or evil. It simply means that we do not respond to injustice or evil by further dehumanizing others. It also means remaining open and connected to my neighbors and remembering that I always have more to learn.