Students in the Medieval Philosophy and the Cold War in Cuba courses took their studies abroad this spring break, as they visited the sites and sounds they learned about in the classroom. 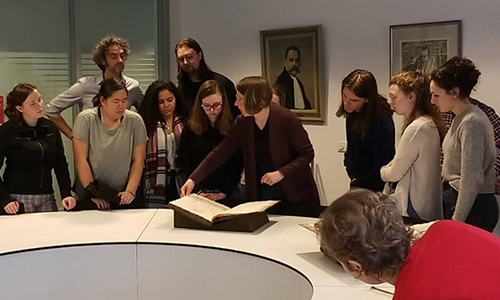 The spring courses are global seminars which combine classroom instruction throughout the semester with an international component during the week-long spring break.

Through PH212 Medieval Philosophy in the Netherlands, philosophy professors Robert Anderson and Joshua Tepley accompanied 11 Saint Anselm College students to the Netherlands where they visited cultural locales and connected with Dutch counterparts at Radboud University. They traveled by train to Den Bosch, Nijmegen, and Amsterdam and then explored the cities by bicycle; they also spent a day in Cologne, Germany. In addition to lectures on medieval and political philosophy, they also visited museums and viewed a rare books collection. The group departed campus on Feb. 28 and returned March 8.

Similarly, history professors Matthew Masur and Philip Pajakowski and 13 students saw history come alive in Havana, Bay of Pigs, and Trinidad through HI387 The Cold War in Cuba. Fully immersed in the country’s history, the group visited an old cigar factory, toured Old Havana, visited museums including one on U.S.-Cuban relations, and participated in a salsa class. They explored cobbled streets and hiked Parque el Cubano, a national park, where swimming in a waterfall was advertised.

“The students see a perspective on American history that they are not as likely to get in the United States; it presents the story in a way that reflects the official Cuban viewpoint,” said Professor Masur.

“I loved going to all of the museums and learning about the history of U.S. and Cuban relations from the Cuban point of view. It was a once in a lifetime opportunity to explore a country that is so closed off to Americans,” said Dena Miller ’20, a history major with politics and American studies minors.

This course examines the Cold War, the international rivalry between the United States and the Soviet Union that lasted from 1945-1991. Throughout the semester they explore the origins of the Soviet-American conflict, the two countries' struggle for global influence, and the effects of the Cold War on American and Soviet domestic affairs.

“One of the highlights of the trip was going to the location of the Bay of Pigs invasion,” said Professor Masur.

“It’s an amazing opportunity for teaching on the streets,” said Jane Bjerklie-Barry, director of Study Abroad Programs. “You’re out in the field and all these things are coming to life so they’re really getting that full third dimension.”

Professors Masur and Pajakowski have led this course before; this is the third time a trip abroad was offered. The course fulfills a Global Engagement core curriculum requirement in addition to giving students a unique experience.

Sophomore history major Kaitlyn Anderson felt lucky to participate in the trip to Cuba. She said she had always wanted to go and was unsure with the current travel restrictions if she would ever be able to visit if she had not accompanied the Saint Anselm group. She loved her experience.

“The Cuban culture was amazing,” says Anderson. “The food, the music, the way they interacted with one another, the language, the hospitality, the art. I found the way they talked about their nation's history to be fascinating.

Miller echoed her classmate’s sentiments. “Overall, my experience in Cuba was phenomenal. I loved every second of it and would do it again in a heartbeat."

Global seminar courses are offered during the spring and summer sessions. In May, students who participated in the course FR346 Normandy through the Ages for two credits may also participate in course FR347 (also two credits) which will take students to France.