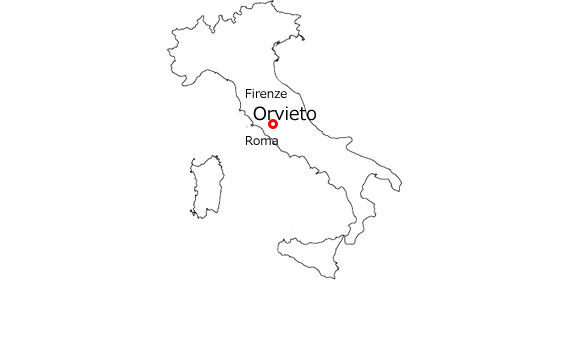 Orvieto is located in the southwest corner of the Italian region of Umbria.  Its natural setting with plenty of water and fertile land has drawn people to the spot for at least 3000 years.  Perched on its rock, it overlooks the Umbrian plains with views of the Apennine Mountains in the distance to the east.

Orvieto's central location allows for easy access to most points of interest in Italy; by train it is an hour from Rome, an hour and a half to Florence.

Orvieto itself has a lot to offer: a relaxed and friendly atmosphere, delicious food and fascinating art and architecture reflecting its many layers of history. 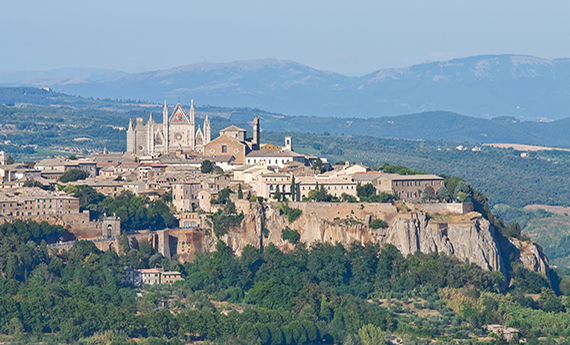 Founded by Etruscans on the top of a volcanic mesa, Orvieto displays a rich and varied history.  Romans, Goths and Lombards have all left their marks.  Being high on the mesa the town affords great views. Indeed today many like to walk or jog along the rampart that rings the city.  These ramparts have been assaulted by Romans, Goths, Byzantines, Lombards, Holy Roman Emperors, but still stand.

Beneath the city is a wide network of tunnels dating from the Etruscan period.  Many of these were used from the middle ages until the early 20th century as stables, columbaria (places to raise pigeons, a local delicacy), workshops and wine cellars. During the WWII Nazi retreat, Orvietani used these caves as shelters. The Allies, upon entering the city, were surprised to see no residents until the population, learning it was safe, rushed out in celebration.

During the medieval period, Orvieto was an important center of culture and religion, where Thomas Aquinas taught and began writing his Summa and five refugee Popes established residence.

Its Duomo (main cathedral), one of the most beautiful in all of Italy, contains a spectacular facade, Signorelli's frescos as well as the corporal of the Corpus Christi miracle. The Duomo also hosts free concerts throughout the year.

Renaissance palazzos grace the city, which today are full of shops, cafes and museums.

Orvieto offers more than just delights for the eyes and ears.  Ask anyone who has been there about Pasqualetti's gelato or local specialties like truffles, cinghiale (wild boar) and the world famous Orvieto Classico wine.

For current news in Orvieto: