The Next Generation of Faith

Today, nearly one-third of the 31 members of the Saint Anselm Abbey were born during the post-baby boom era - representing a powerful example of the community’s continuity and vow of stability for generations to come.

In the fall of 2013, Louis Franciose was a first-year student at Saint Anselm College looking to make connections in a new community that was 2,395 miles from his home in Salt Lake City, Utah.

And by October of 2017, during a retreat at Saint Anselm Abbey a few months after his graduation, he realized this might just be home for the rest of his life.

Br. Basil is one of 11 younger men who have entered the monastery in the past decade, with a 12th—Jacob Halterman, a graduate of the class of 2021—expected to join in 2022. Eight of the newer members are graduates of the college.

“One might think there’s no reason for this ragtag group of people to live this life together, except that we have some common understanding of the fact that we’re here, seeking Christ,” Br. Basil says.

The monastic community at Saint Anselm was established in 1889 when the Bishop of Manchester asked the Benedictine monks of Saint Mary’s Abbey in Newark, N.J., to create a parish and a college to serve the immigrant population that largely worked in the mills along the Merrimack River. With a vow of stability as a core tenet of the Rule of Saint Benedict, Saint Anselm Abbey has been a permanent home to 97 monks, including the current 31 living members.

Five of the newer monks work at the college in Campus Ministry, the Finance Office, the Academic Resource Center, the Geisel Library, and one as a faculty member in the philosophy department. Br. Thomas Lacourse, O.S.B. ’15 recently completed his doctorate at Trinity College in Dublin, Ireland, while Br. Dunstan Enzor, O.S.B. is a doctoral student at Boston College.

One of the 11 younger monks has been ordained a priest, while two others have been ordained deacons, and three are currently doing seminary studies.

Adding a dozen new monks in 10 years is significant, and the young confreres bring vibrancy to a community whose members currently range in age from 27 to 93, explains Fr. Mathias Durette, O.S.B., who has been a monk at Saint Anselm for 34 years.

“I mean, I'm showing my age, but it brings life, you know, literally. We have guys that are half my age, so I have no worry—I never did, but now I have proof positive—I have no worry about the future of the house,” he says. “It's going to be in good hands because a good group of people—extremely diverse, I mean, all of us are, there are no two alike, but the quality, their attention to our customs … they’re exhibiting all the right things that bring me, as someone who has been here for so long, a lot of comfort for the future.”

Community plays a big role in attracting younger monks, says Fr. Francis McCarty, O.S.B. ’10, who entered the monastery in 2015. Fr. Francis works in Campus Ministry and believes the intertwined nature of the Abbey and the college is a draw to not only new monks but also to faculty, staff and students. In both the monastery and the college, there is a mix of older and younger people who benefit from being together.

“What makes this place unique is that young people are exposed to long-term institutional memory,” Fr. Francis says. “We want to maintain the legacy that makes Saint Anselm special. We look to our older confreres for advice and guidance. They often provide old-school solutions to modern-day problems.”

Fr. Francis believes contributing to the future of the monastery and the college is crucial to his life’s work. This is also true for Br. Dunstan, O.S.B., studying historical theology at Boston College who came to Saint Anselm in 2017 and professed vows in 2019.

“I think all of us, whether we’re monks or whether we’re not monks, come to Saint Anselm College because we think we have a contribution to make, and there are ways in which we can serve the community,” Br. Dunstan says. “As a monk of Saint Anselm Abbey, I certainly feel that way. I know it’s very important to me to be of service to Saint Anselm College, to the students, to the faculty, to the staff. The mission of this college is very attractive and very venerable.”

"I have no worry about the future of the house. It's going to be in good hands."
- Fr. Mathias Durette, O.S.B.

Both Br. Basil and Br. Dunstan, who each experienced life in other religious communities before coming to Saint Anselm Abbey, appreciate the regimen of monastic life on the Hilltop and the “incredible continuity” within the community.

As an example, Br. Basil pointed to Fr. Cecil Donahue, O.S.B. ’50, who took vows in 1948 and has been in the monastery since the time of Abbot Bertrand Dolan, O.S.B., the first abbot. Fr. Cecil still teaches monastic history to young monks, including Br. Basil, who arrived shortly after Abbot Mark Cooper, O.S.B. ’71 became the fifth abbot.

"You look around and you've got some uncles, and cousins, and some grandfather figures, you get a strength from it."
- Br. Basil Louis Franciose, O.S.B. '17

“Sometimes you feel like you're living with a bunch of uncles,” Br. Basil says. “You're a 20-something-year-old. You got a number of 20-somethings around, so they look around and you’ve got some uncles, and cousins, and some grandfather figures, you get a strength from it. For sure, you feel like a family, because you have those varied ages with varied numbers of experiences within the college and just within the monastery as well.” 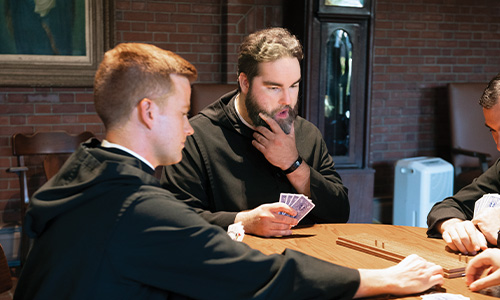 The infusion of younger monks is something not all monasteries are experiencing, so why Saint Anselm? Abbot Mark attributes the phenomenon to the “very good community life” on the Hilltop. He also sees momentum building among the new recruits. “Once you get a couple of young people, it attracts other young people,” he says.

Plus, he adds, “We have always had an excellent community, and these young men add to that. They have a good sense of self, a good sense of humor, and a good sense of their vocations. These are all essential elements to leading a good and joy-filled monastic life.”

Fr. Mathias believes the nature of the Abbey community is a factor as well.

“As former prior, I've been to other monasteries, spoken to other formators,” he says. “Their observance seldom appealed to me like it does here. We’re neither conservative, nor liberal, I think it’s a healthy middle ground where people can be pious, they can have a very observant prayer life, but they'll fit in here.”

Over the past few years, Abbot Mark has collaborated with the college’s human resources department to have the younger monks placed in a number of academic and administrative offices to experience a range of jobs at the college. Others are working more permanently in offices, such as Fr. Stephen Lawson, O.S.B. ’08, who is working in the area of finance.

The idea is to maintain a strong bond between the college and the monastery. “There hopefully will be a good Benedictine influence for a long time to come,” Abbot Mark says.

The monastery has a monk representing every decade from their 20s to those in their 90s. The average age of the community is currently in the mid-50s, following the deaths of Fr. Peter Guerin, O.S.B. and Fr. Laurence Schlegel, O.S.B. ’49 this summer.

However, Fr. Francis remembers that when he was a student there were not as many younger people joining the monastery. That has changed. “There are now a good number in their 20s and 30s, so there is a foundation here,” he says.

For his part, Saint Anselm President Joseph A. Favazza, Ph.D., is pleased with the emergence of younger monks in the monastery and what it means for the college.

“The identity of Saint Anselm begins with the Abbey and the future of the college relies on the continued sponsorship of an engaged monastery,” he says. “We are so fortunate to know the foundation of this very special place is secured for many years to come.”

"The future of the college relies on the continued sponsorship of an engaged monastery."
- Joseph A. Favazza, Ph.D., Saint Anselm President

Meet the Next Generation 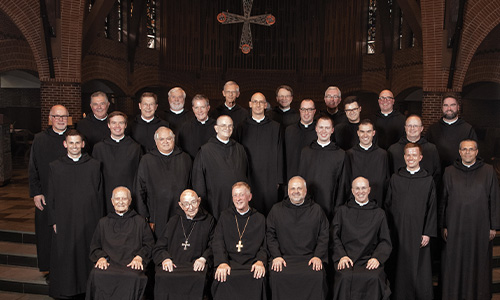 Br. Amadeus Cundiff, O.S.B.
Hometown: Denton, Texas
Entered the monastery in 2020 for a period of probation before transferring from Belmont Abbey
Teaches part-time in the philosophy department; serves part-time in the Geisel Library

Br. Celestine Hettrick, O.S.B.
Hometown: Salem, N.H.
Entered the monastery in 2019; took vows in 2020
Preparing for priesthood at the Boston College School of Theology and Ministry

Fr. Stephen Lawson, O.S.B. ’08
Hometown: Holyoke, Mass.
Entered the monastery in 2010; took vows in 2011
Ordained to the priesthood in 2017
Served as campus minister; currently serves in the Finance Office while preparing for graduate studies

Br. George Rumley, O.S.B.
Hometown: Asheboro, N.C.
Entered the monastery in 2021 for a period of probation before transferring from Belmont Abbey
Serves in the Office of Campus Ministry

Fr. Aloysius Sarasin, O.S.B. ’17
Hometown: Leominster, Mass.
Entered in the monastery in 2017; took vows in 2018
Ordained a deacon in 2021
Preparing for priesthood at Saint Meinrad Seminary in Saint Meinrad, Ind.