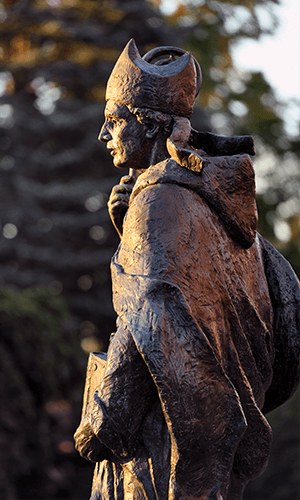 In a brainstorming session of the Portraits advisory committee last fall, Fr. Anselm Smedile, O.S.B. ’93, had a story idea for a future issue of the magazine.

The subject Fr. Anselm suggested was on people’s minds, something that had been in the headlines for months as protests in cities across the United States revealed yet again the deep divide over racial equity and law enforcement. It was timely, it was topical, but there was a problem.

It could be explosive.

Depending on your point of view, very different emotions and opinions are engendered by race relations and police interactions with people of color. It is a topic people either stay clear of discussing or they careen headfirst into angry declarations.

At Saint Anselm, however, students learn from the first days of core humanities classes how to engage in a healthy discourse in a civil manner. It seemed possible to have this sensitive and important conversation on the Hilltop.

“I thought it would be good to have a substantive article that would stay on people’s coffee tables, that would be intriguing enough and provocative enough that people would read and really think about and talk about and share outside of the Saint Anselm community,” he said. “Something that you might expect from an institute of higher learning and also from a Catholic, Benedictine college.”

Catholic, Fr. Anselm explained, because Catholics believe in the dignity of the human person and are called to rise above all divisions and conflicts between people and to form humanity into a single family, to build a civilization of love and peace. Benedictine because Saint Benedict, at the end of his life, had a vision of the “whole world and all its peoples in a single ray of light.”

Fr. Anselm’s suggestion soon took shape as “Reimagining Justice,” a program with the goal of gathering people with diverse perspectives to discuss the sensitive topic of race and law enforcement in an honest and productive manner.

“Reimagining Justice” was developed by the Gregory J. Grappone Humanities Institute in partnership with the Anselmian Network for Racial Justice, the Saint Anselm Criminal Justice Department, and the Office of Alumni Relations.

The three-part webinar series featured a panel of police officers, prosecutors and defense attorneys, community activists, social workers, and a New Hampshire Supreme Court justice as they considered how to “reimagine” policing practices and how the justice system can better serve all people.

Among the speakers were alumni Stephanie Dahlberg ’14, a community social worker and Medicaid housing coordinator; Jim Testaverde ’97, deputy police chief for the Nashua Police Department; and Rob Browne ’95, the director of safety and security at Saint Anselm College and the former police chief of the Goffstown Police Department.

“Racial justice is an extremely important conversation to have because most people in America don’t even realize the challenges that millions of Americans endure,” Browne said. “Having these discussions brings awareness, understanding, and differing points of view so that we can all be able to walk a mile in one another’s shoes.

I think the conversations don’t occur with enough frequency because we are afraid of hearing that there are problems in America, in policing, with social disparities and inequities that are difficult to talk about.”

Browne was a panelist during the first session, “First Encounters: Police Stops and Race.” He pointed out the Goffstown police have a good relationship with the community they serve, and there are many positive interactions with police across the country, but he acknowledged there is a general distrust of police in some communities in America.

“I came from a community where our police force was cherished and relied upon to help,” he says. “It is so foreign to have the overwhelming feeling that police are mistrusted for the actions of a small percentage of negative interactions people have had. I am thankful for my time in service to my community where I believe I made positive differences in the lives of people.”

Following the death of George Floyd last May, as images were shared of Minneapolis police officer Derek Chauvin restraining Floyd with a knee on his neck, protests ignited across the country, and angry exchanges erupted on social media. At that time, Saint Anselm College President Dr. Joseph A. Favazza called on the Anselmian community to live the Benedictine values of hospitality and compassion, and to channel the rising passions into civil discourse and communitywide action.

In response, the Anselmian Network for Racial Justice was formed as a way to cultivate empathy among students, faculty, and staff, as well as a commitment to review institutional practices and policies to ensure the Saint Anselm community is both just and equitable.

In speaking out about racial inequity after Floyd’s death, Dr. Favazza cautioned people not to fall into the trap of stereotyping.

“To be clear, I have a deep respect and appreciation for members of law enforcement, who in the heat of this social movement are often painted unfairly with broad and negative strokes,” Dr. Favazza said. “As Anselmians, we have a responsibility to understand the many dimensions engendered when the sensitive topic of race in America is discussed, and we must approach discourse with open minds and hearts to better understand all aspects of our world, and all perspectives within our community.”

With an audience of more than 200 people tuning in on Zoom, the first “Reimagining Justice” discussion featured a keynote address by former Boston Police Commissioner and Massachusetts secretary of public safety Kathleen O’Toole, who pointed out what people see on television is not what police work is all about. In fact, the majority of time is spent interacting with the community and helping vulnerable people in a variety of ways. Her experience working as a patrol officer in the late 1970s shaped her philosophy on the best ways to conduct community policing. 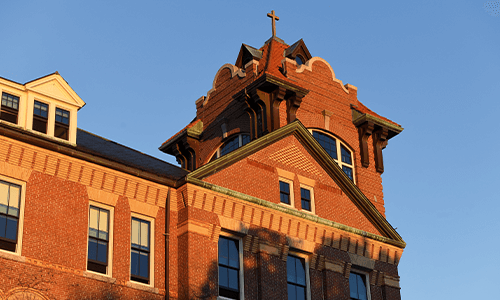 To her, it is important to have a wide range of social training for law enforcement—focusing on prevention rather than reacting to crime—and to have a police force that demographically represents the community it serves.

O’Toole said there needs to be work on the policing model, but it has to be wholistic and not reactionary.

“We've never faced greater challenges than we're facing right now,” she said. “If we can harness our energy and our resources, continue to participate in this dialogue, but then get out there and roll up our sleeves and make a commitment to our communities, I think we can really make a huge difference.”

The second session, “Keeping Watch: Surveillance and Race,” featured keynote remarks from Julian Jefferson, a staff attorney with the New Hampshire Public Defender, where he represents indigent clients accused of crimes ranging from misdemeanors to acts of homicide.

Reflecting on his own feelings following the death of George Floyd, and sharing personal stories of being profiled as a person of color in New Hampshire, Jefferson stressed the importance of engaging in conversations that could make people feel uncomfortable.

“We as a society have an obligation to nurture and protect. Nothing about our conversation today is going to be easy, and that’s OK, too,” Jefferson said. “This is a hard and complex problem—a problem that requires us to bring our full measure of focus, ability to listen, and have goodwill.”

At several moments during the “Reimaging Justice” sessions, there was tension among the panelists as differing perspectives and experiences were shared. As the dialogue continued, however, the panelists moved toward common ground. In the first session, the speakers continued to speak with each other and the audience long after the formal 90-minute presentation had ended, with the panelists spending another 45 minutes answering every question from the audience.

Having such conversations may be difficult, but they are critically important, said Dr. Gary Bouchard, a longtime professor of English and the executive director of the Grappone Humanities Institute. Acknowledging the subject of race and police is a sensitive topic and one that can fuel passions from different perspectives, Dr. Bouchard said the Saint Anselm community is not afraid to engage in the discussion.

"We have a long and successful history of preparing people to work in vital frontline fields like policing and nursing and teaching. Ans what every Saint Anselm graduate shares in common is a core of studies in the foundations of human learning."

“We have a long and successful history of preparing people to work in vital frontline fields like policing and nursing and teaching. And what every Saint Anselm graduate shares in common is a core of studies in the foundations of human learning,” he said. “It’s a core that has changed with time, and one that nearly every student at one time or another has complained about, but then, three, six, or 10 years after graduation they discover it’s not the courses in their major that are necessarily helping them succeed and progress professionally and personally. It’s that core—their rootedness in the humanities, their confrontation of the big questions about life that they thought they were done answering on the final exam. So, we have this population of graduates who work in areas like law enforcement and social work who are able to speak eloquently from their experience and their foundation in the humanities about the problems of justice we are now facing in this country.”

Following the “First Encounters” and “Surveillance and Race,” the final session was titled “New Directions in Policing.”

The Honorable John T. Broderick, Jr., retired chief justice of the New Hampshire Supreme Court, gave the keynote address. He emphasized the importance of understanding mental health issues as they intersect with law enforcement, pointing out that police officers are often the first responders for a wide spectrum of social work situations.

He also discussed the impact of job-related stress on police officers and the fact that suicide accounted for more deaths among law enforcement than
any other line-of-duty cause.

Dr. Liana Pennington, an associate professor of criminal justice and former attorney at the New Hampshire Public Defender, was one of the organizers for “Reimagining Justice.” She said bringing in a diverse group of speakers was important to the success of the program, and the conversations hit on topics that are currently being debated in the New Hampshire Statehouse and elsewhere in the nation. 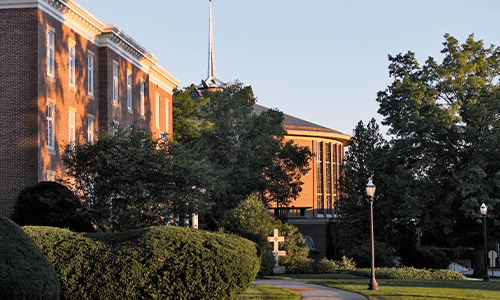 “Our goal was to have productive discussions where not everyone agreed with each other, but where there was respect and open-mindedness,” she said. “Saint Anselm College has a reputation for being a place where different views are respected and valued. Our objective was to discuss these difficult issues involving policing and race, as our program stated, ‘in light of core Anselmian values such as engagement with the community, the pursuit of justice in all forms, and the fostering of human understanding’.”

Fr. Anselm is hopeful that “Reimagining Justice” is a beginning—not only of an important conversation but also of an examination of how the college can consider bringing key disciplines together, such as sociology and social work with criminal justice. Graduates with a diverse skill set could be valuable resources in a police department.

“If I’m a police chief, I would really want to hire a Saint Anselm grad because the Saint Anselm way of approaching (police work) is different and probably more effective than what other schools might offer,” he said.

Like Dr. Bouchard, Fr. Anselm believes the foundational Saint Anselm education and experience can prepare people to have engaging and respectful conversations, even on topics as difficult as race and policing.

“You go to the alumni awards dinner every year and all of those speakers get up and they talk about how it was the liberal arts courses, theology, philosophy, English, and that was what influenced how they approached whatever they were doing that had risen to a level the alumni community is recognizing them for their achievements,” Fr. Anselm said.

"Our goal was to have productive discussions where not everyone agreed with each other, but where there was respect and open-mindedness."