Letters for the Spring/Summer 2022 Issue of Portraits

To the Editor, Portraits: 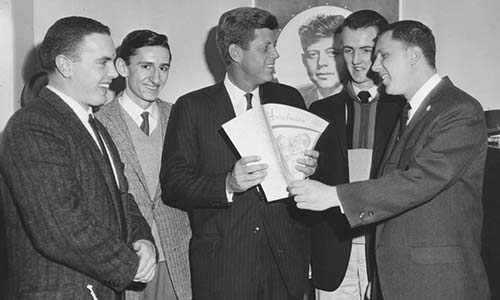 The article on the 20th anniversary of the New Hampshire Institute of Politics in the Fall/Winter 2022 issue of Portraits was most interesting. Your readers might like to know more. On page 32, the top photo (shown left) can be fully identified. John F. Kennedy stopped by the Hilltop during the New Hampshire Presidential Primary in 1960. Sponsored by the Saint Anselm Chapter of Young Democrats, he spoke to the student body at the old Abbey Theater located behind the Main Building. In the photo with Kennedy are Anselmians (from left) Richard Dwyer ’61, John Evans ’62, William Burns and John Coakley ’61. Interestingly, Kennedy is holding a copy of the October 30, 1958, Anselmian, the campus magazine. On the cover was the new campus under construction at that time, the one we know today. It was an exciting time!